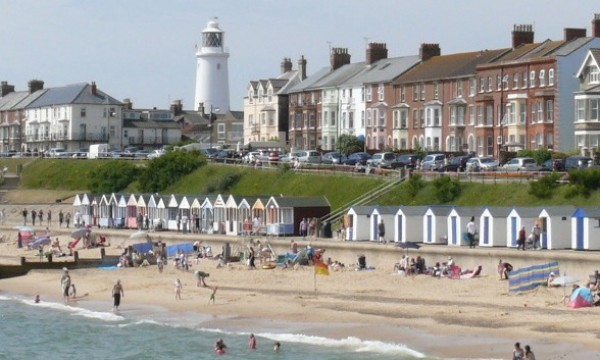 Photo southwold.onesuffolk.net
A popular stretch of the English seaside is at the centre of a nuclear leak drama after traces of deadly radioactive materials were found on the beach.
Southwold on the Suffolk coast is nicknamed Hampstead-on-Sea due to all the celebrities who flock there for their holidays, often buying second homes in the area.
It is feared that the radioactive material detected on the beach may be linked to the Sizewell A nuclear plant which is located along the Suffolk coastline and is in the process of being decommissioned at a cost of 1.2 billion Sterling after shutting down ten years ago.
Celebrities including Chris Evans, David Tennant, Dame Judi Dench, Michael Palin, Griff Rhys-Jones and Stephen Fry are all regular visitors to the beach.
While detective writer PD James, her friend Ruth Rendell, Butterflies actor Geoffrey Palmer and broadcaster Libby Purves have all bought homes in the area.
Southwold is the second Suffolk beach to be hit by radioactive contamination in two months.
In April, scientists monitoring the area around Sizewell revealed that a 'small amount' of a particularly dangerous and 'unusual' radioactive isotope had been found at Aldeburgh, 18 miles from Southwold.
The Sizewell plant is on the coast between the two resorts.
The Environment Agency insisted today that there are 'no safety or environmental concerns and no risk to members of the public'.
Revealing the latest alert, spokesman Stuart Parr said that Caesium - a metal used in medical applications, industrial gauges, and hydrology, and said to be 'mildly toxic' - had been found at Southwold.
'It was a very small amount and could be to do with tide patterns,' he said.
Investigations are taking place to find out the source of the radiation leak.
Sizewell A has been examining the Strontium-90, produced by nuclear fission, found at Aldeburgh beach, one of five beaches monitored in the area.
Extra samples have been taken along the shoreline and Mr Parr said: 'We are continuing to engage with the operator in this investigation.
'The results from the analysis of these additional samples are not yet available.
'It can take many weeks for Strontium-90 to be analysed due to the complexity of the analytical technique, which needs to be done in a laboratory.
'A sample taken from Aldeburgh beach earlier this year has been sent to two laboratories for comparison.
'Differences in working practices in different laboratories can cause subtle differences in analytical results which become important when working with such low concentrations of Sr-90 in these samples.
'Once all the data has been received and analysed a full report will be made by Sizewell A.
'It is important to note that these results are unusual, the levels of radioactivity detected are extremely low and do not represent a hazard to anyone using the beach.'
Southwold is popular with holidaymakers - the town has less than 2,000 residents in the winter but this swells to almost 10,000 in the summer.
There's even a 'Southwolds Celebrity Tour' where visitors can walk past homes of celebrities and visit the pubs and restaurants where they can often be seen relaxing.
The walk starts at the 19th century pier on the beach, which was the setting for several Little Britain comedy show sketches.
Some of the famous multi-coloured beach huts change hands for more than 100,000 Pounds.
The town centre's Orwell Bookshop commemorates one of Southwold's most famous residents, George Orwell.
Sizewell A power station shut down on December 31, 2006, with the Nuclear Decommissioning Authority placing the contracts at a budgeted cost of 1.2billion.
There are actually two Sizewell nuclear power stations, both near the small fishing village of Sizewell between Aldeburgh and Southwold.
Sizewell A, with two magnox reactors, is being decommissioned, while Sizewell B has a single pressurised water reactor and is the UK's newest nuclear power station.
A third power station is planned.
at June 18, 2016