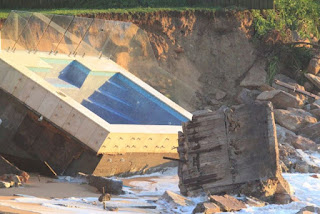 Massive waves up to 8 metres high smash Collaroy resort on Sydney's northern beaches: 3 DEAD!
An in-ground pool was moved about five metres out to sea. Photo Fairfax Media: Peter Rae
Sydney's wild weather: Worst storm in 40 years swallows pools, up to 1000 evacuated from their homes and the city's transport system in chaos
Three people are dead and more are missing after massive storms flooded rivers, uprooted trees and tore into beaches along Australia's east coast.
Storms continue to batter southern New South Wales, Victoria and Tasmania.
Erosion at Sydney's Collaroy Beach has forced the evacuation of multi-million dollar homes, which are now in danger of collapsing reports the BBC.
Collaroy, located in Sydney's north, is considered a prestigious suburb, but the beach is an erosion hotspot 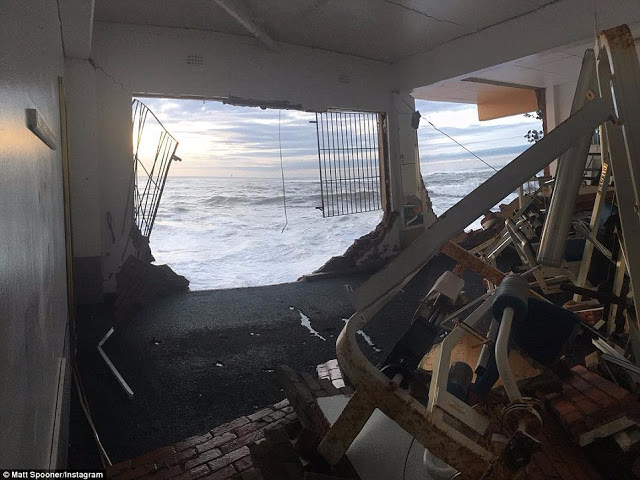 Photo BBC
Waves up to 8 metres have hit Collaroy on Sydney's northern beaches, crashing into beachfront properties and causing an in-ground swimming pool to collapse, as wild weather battered NSW. About seven houses and a unit block were evacuated at Collaroy as a huge low pressure system moved over the state Sunday night, Inspector Jason Reimer said.
"One of the properties along that strip actually lost an entire in-ground pool which had moved about five metres out to sea," Inspector Reimer said.
Waves made it about 50 metres onto the main road, damaging homes, yards and the local beach club. The beach and embankments have been left covered in debris, including branches, upturned bricks and limestone boulders.
Collaroy local Craig Graham said the beach looked like a disaster zone.
"The waves must have come up pretty high last night," Mr Graham said.
"The club looks like it's lost all its balcony."
You could tell it was going to happen yesterday, but it must have got a hell of a lot worse last night." Mr Graham said the last time he had seen such a huge storm was about 20 years ago - another east coast low.
"It's the worst I've seen it here," he said.
"I've never seen it come up this high with this amount of storm surge, and I've been living here about 40 years.
"I'd say they've got a bit of work to do.
"But it could be worse, no one got hurt, that's the main thing."
UNSW coastal engineer Mitchell Harley said erosion caused by the waves was "particularly concerning".
"Collaroy is a well-known erosion hot-spot and has been identified as one of the top five along the New South Wales coast," Dr Harley said.
More than 100 northern beaches residents were housed in two evacuation centres on Sunday night. Cromer Community Centre and Pittwater RSL provided the residents with shelter, food, and blankets. "We accommodated people in hotels and made sure people had friends and family to go to," Family and Community Services operations manager Leslie Russell said.
"Once police say it's safe for people to return home, we'll provide transport back to homes.
"The staff have done an amazing job and some of them have been affected themselves."
Earlier, the SES said crews were heading to the area to assess the damage.