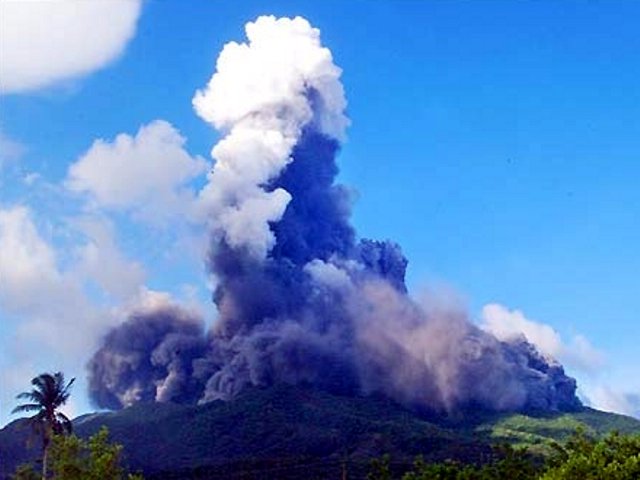 Photo volcano.si.edu
A sudden eruption occurred this morning (at 11:35 local time).
An explosion generated an ash plume that rose about 2000 m above the volcano's summit and drifted northwest, causing light ash falls in nearby downwind areas.
According to PHILVOLCS, the eruption preceded by a seismic swarm with more than 100 small earthquakes and lasted 5 minutes.
The eruption itself was only steam-driven - no magma itself has reached the surface,- and caused by explosion of over-pressurized and over-heated fluids from the volcano's strongly developed hydrothermal system.
A similar explosion had occurred on 21 February.
Following it, scientists monitoring the volcano have been seeing an inflation of the edifice (swelling of the ground) since May, probably caused by magma intruding at depth.
This would have been providing new energy (heat) to the system and cause increasing instability. Bulusan's official status remains unchanged at "Alert Level 1 (abnormal)" on the scale of 0 (normal) to 5 (highest):
"This indicates that hydrothermal processes are underway beneath the volcano that may lead to more steam-driven eruptions.
The local government units and the public are reminded that entry to the 4-kilometer radius Permanent Danger Zone (PDZ) is strictly prohibited due to the possibility of sudden and hazardous steam-driven or phreatic eruptions.