Putting the last pieces of the jigsaw puzzle together: Our governments' silence on certain issues is probably revealing the truth: A sign from Heaven? 2012, the year conspiracists claimed would be our last almost was: Are our leaders preparing for two mighty events mentioned in the Bible? 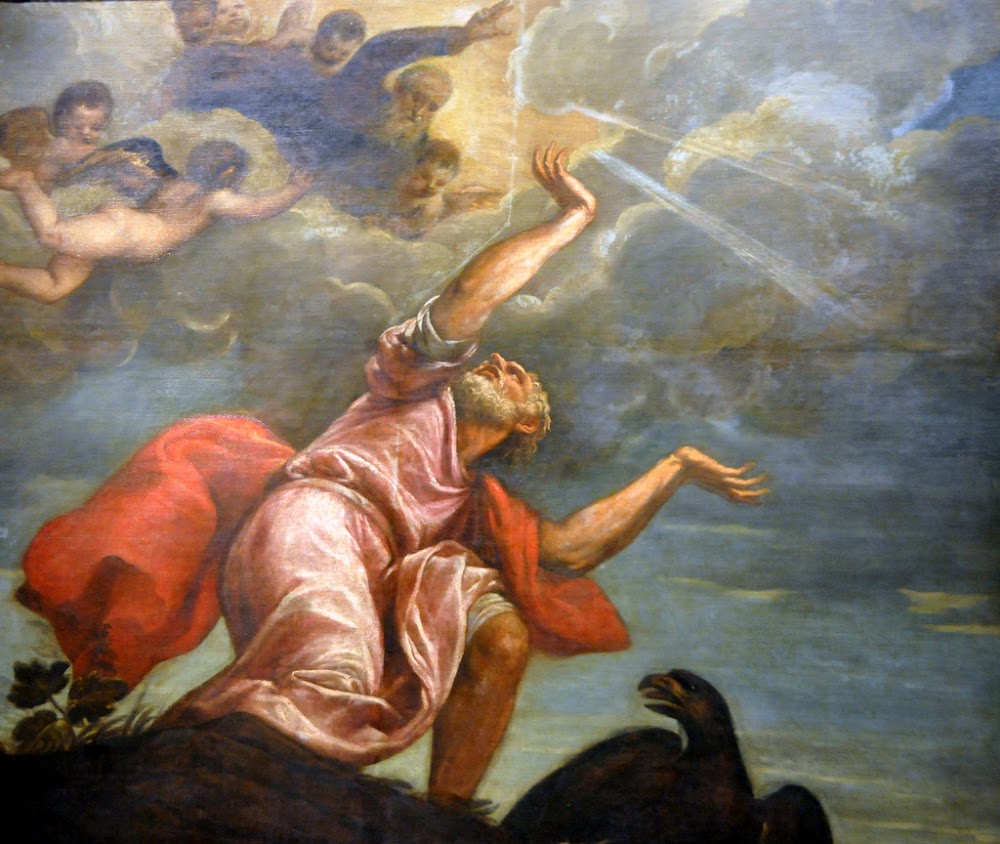 John the Evangelist who wrote A Revelation To John. Did John witness powerful coronal mass ejection and a pole shift during his epic visions. Credit Wikimedia.
According to Wikipedia, The Nordic Gene Bank has, since 1984, stored backup Nordic plant germplasm via frozen seeds in an abandoned coal mine at Svalbard. In January 2008, the Nordic Gene Bank merged with two other Nordic conservation groups to form NordGen. The Svalbard Global Seed Vault officially opened on 26 February 2008 and now houses more than 20 million seeds from around the world.

Svalbard might be the most famous seed bank in the world and is ironically at the moment under threat as the permafrost in and around the vault has begun to defrost due to climate change, however, it remains the figurehead of a mission to protect the huge diversity of plant life on Earth. But it is just one of a global network of 1700, spread all across the world, each of them protecting and securing the biodiversity of the countries they call home. Full story

There are also many hidden cities buried underground, as well as military bunkers. The US NORAD Alternate Command is buried in the Cheyenne Mountain.  In early 2015, Admiral William E. Gortney, commander of NORAD and NORTHCOM, announced a $700 million contract with Raytheon to move systems into the complex to shield it from an electromagnetic pulse attack. According to Adm. Gortney, "because of the very nature of the way that Cheyenne Mountain's built, it's EMP-hardened. And so, there's a lot of movement to put capability into Cheyenne Mountain and to be able to communicate in there." Full story. Cheyenne Mountain is thought to be connected by tunnels to other underground bases many many miles away. China and Russia are said to have giant military and none military facilities underground.

It's no secret that the rich and even the not so rich have been investing heavily in doomsday bunkers recently and not just in the US, prepping has become a global phenomenon. The question is "why?"

SAO/NASA data system (ADS) claimed, "without question, we are witnessing the greatest sunspot activity ever recorded." (even to this day, added by G Walton). SAO/NASA Astrophysics Data System (ADS).

The period described above was solar cycle 19, the nineteenth solar cycle since 1755 when extensive recording of solar sunspot activity began. Solar cycle 19 lasted 10.5 years, beginning in April 1954 and ending in October 1964. However, The number of sunspots witnessed on the Sun during Christmas Eve and Christmas Day 1957 was an amazing and unprecedented (503), which alarmed scientists so much at the time, that an International Geophysical Year was declared at the peak of this solar cycle to bring the Russian and US scientists onto the same page after the cold-war silence to find out what could have caused the solar activity.
Curiously, President Eisenhower went on to authorise the opening of the National Aeronautics and Space Administration (NASA) in July 1958. The Space Race Had Began. Sputnik 1 was launched on October 4, 1957, (just two months before our Sun went ballistic,) beating the United States and stunning people all over the world. In 1958, during the Explorer 1 launch,  NASA first observed that changes in the solar orbit of the earth, along with alterations to the earth’s axial tilt, suggested solar activity was responsible fluctuations in our planet's weather. In the year 2000, NASA did publish information on its Earth Observatory website about the Milankovitch Climate Theory, revealing that the planet is, in fact, changing due to extraneous factors that have absolutely nothing to do with human activity. (records show our planet began to heat up around the same time our Sun went ballistic in 1957) But this information has yet to go mainstream, see the report on Earth Observatory Coincidently, Milankovitch died in 1958. The maximum sunspot number observed during the solar cycle was 503, on Christmas Eve and Christmas Day 1957 (the highest on record). Intense red aurora displays frightened people in Europe on 11 February 1958 and were visible from many US cities as far south as the 40th parallel. This geomagnetic storm caused a radio blackout over North America. Aurora displays were visible over New York on 13 November 1960 and 1 October 1961. Could a large object close to the sun have caused this unprecedented solar activity?
11 years later in 1972, NASA launched the space probe Pioneer 10, its main goal was to search for a mysterious 10th planet in our Solar System or just beyond and the famous press release 20 years later claiming, "unexplained deviations in the orbits of Uranus and Neptune points to a large outer solar system body 4 to 8 Earth masses on a highly tilted orbit,  beyond 7 billion miles from the sun. Ray T. Reynolds, NASA (NASA press release, 1992).

Astronomers studying the Kuiper Belt have noticed some of the dwarf planets and other small, icy objects tend to follow orbits that cluster together. By analyzing these orbits, the Caltech team, The California Institute of Technology predicted the possibility that a large, previously undiscovered planet may be hiding far beyond Pluto. They estimate the gravity of this potential planet might explain the unusual orbits of those Kuiper objects. And of course the unexplained deviations in the orbits of Uranus and Neptune.

What is NASA's thoughts on Planet X?
The California Institute of Technology (Caltech) researchers have found mathematical evidence suggesting there may be a "Planet X" deep in the solar system. This hypothetical Neptune-sized planet orbits our Sun in a highly elongated orbit far beyond Pluto. The object, which NASA researchers have nicknamed "Planet Nine," could have a mass about 10 times that of Earth and orbit about 20 times farther from the Sun on average than Neptune. It may take between 10,000 and 20,000 Earth years to make one full orbit around the Sun. NASA
What caused the sun to go ballistic on Christmas Eve and Christmas day 1957 we will never know, however, the date is significant in many topics tearing the scientific world apart today such as the Milankovitch Climate Theory, revealing that the planet is, in fact, changing due to extraneous factors that have absolutely nothing to do with human activity, while other scientists today claim our climate is warming due to human activity and their use of co2.
Other factors though, occurred around the late 50s early 60s which are truly astounding. For instance, graphs showing natural disasters suddenly spike around 1960 and continue to rise, the same happens to major earthquakes, Tornadoes, volcano eruptions and yes the rise in global temperatures. TBW  and TBW and TBW Below is the graph from Our World In Data! 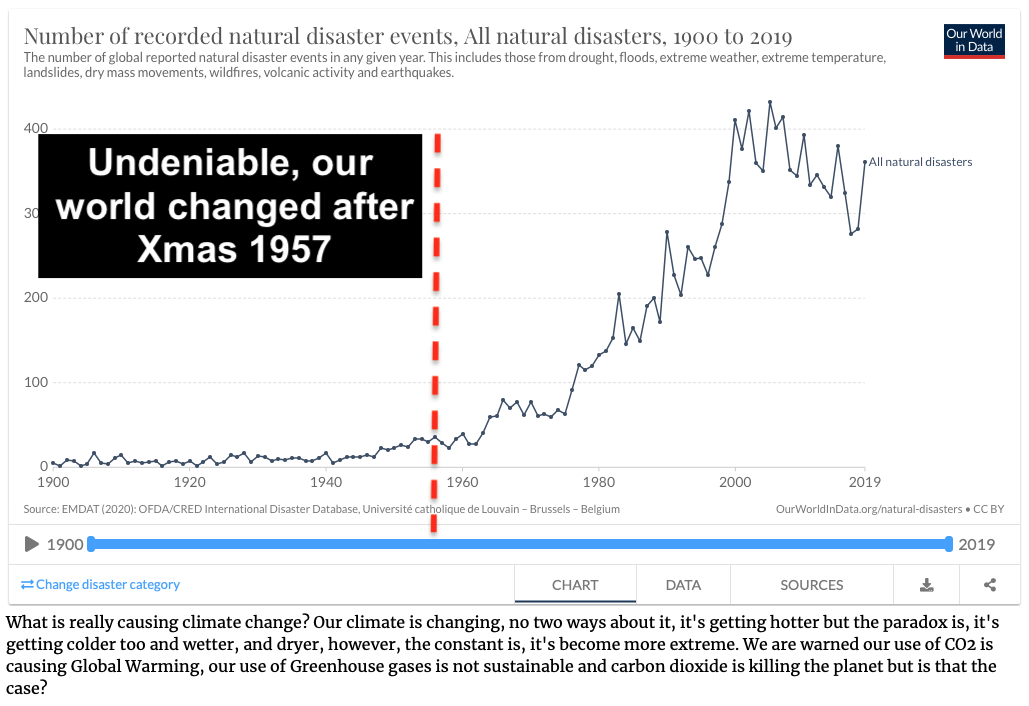 Chuck Missler wrote: "The only barrier to truth is the presumption that you already have it." I have always been a huge sceptic of Planet X, the pictures and videos I have seen on the internet, you know, pictures of two suns close together, they are usually pictures of a sun-dog, (an atmospheric optical phenomenon that consists of a bright spot to one or both sides of the Sun), or lens flare and besides, if a planet was close enough to be clearly visible to the naked eye it would already be creating big problems to our own planet, wouldn't it? But wait... Our planet is behaving strange and we are suffering big problems and...These big problems have been increasing at an alarming but steady rate since just before the space race begun in 1957, coincidence? I am not sure anymore, personally, I am not so sceptical as I once was. A large planet type object approaching Earth could very well be the cause in the rise of temperatures and other natural disasters on our vulnerable planet.

Is there a clue in the Bible?

Revelation 16:17 The seventh one poured out his bowl on the air. At this a loud voice came out of the sanctuary from the throne, saying: “It has come to pass!” 18 And there were flashes of lightning and voices and thunders, and there was a great earthquake unlike any that had occurred since men came to be on the earth, so extensive and so great was the earthquake. 19 The great city split into three parts, and the cities of the nations fell; and Babylon the Great was remembered before God, to give her the cup of the wine of the fury of his wrath.k 20 Also, every island fled, and mountains were not found. 21 Then great hailstones, each about the weight of a talent, fell from heaven on the people, and the people blasphemed God because of the plague of hail, for the plague was unusually great. That sure could be a description of a huge planet type object passing close to Earth, of course, we don't know and hopefully, we are not here when the great earthquake arrives.
xx
Space Weather 2020
Front Page Headlines
at August 28, 2020

if you want to see nibiru so called planet x go zetatalk, and see albertos photos. due..

Hey Gary this is Melly, everybody love is the word. God bless.

You too Melly, stay safe Sir

Andrew Washington
The crux of Chan Thomas research was our solar systems relative position to an area of the galaxy called null or reversal zones and it’s the pull of these as we approach that causes the pole reversal and cataclysm.
It’s hard to believe that God would have this happen every 12,000 years or so but it explains many things about ancient advanced civilisations and how only the stone structures survive whilst the civilisations didn’t.
Douglas Vogt of Diehold foundation has deciphered the codes from the Torah, he calls it the ‘clock-cycle’ over 12,068 years and they are linked to the Gleissberg sun cycle and predicts next pole reversal 2046.

Pluto Dublin
Silence, at times, can be deafening.

Ed Blunk
Getting Closer by the day :

Excellent article! It explains a lot. See this for more: [url]https://raptureandendtimes.com/2020/08/22/end-times-crisis-believe-science-or-the-bible/[/url]

Two future events that will change the world, Psalms 83, Ezehiel 38-39 God bless us all.

Get a bible & read it to learn about your future, try Rev 14:9-13, there is a way out from the 7-year tribulation/wrath of God, accept Jesus Christ as your savior & live eternally w/ him, you can become a child of God. Amen. God bless us all.

Somebody has to plant the seed, your faith in Jesus Christ will water it, God will make it grow.God bless everyone. Amen.

Isaiah 17 has not happened either, it says that the capital of Syria is totally destroyed, describes a nuclear explosion. God bless us all. Amen.


Ben Davidson over at Suspicious Observers put out a great video about this showing much of the current evidence proving this will happen Watch it here
https://youtu.be/B_zfMyzXqfI