A letter from Holland: My pragmatic take on global warming/climate change as parts of Europe prepair for temperatures exceeding 40 deg F, (104F) new records are set to be broken after a winter so mild many animals didn't hibernate 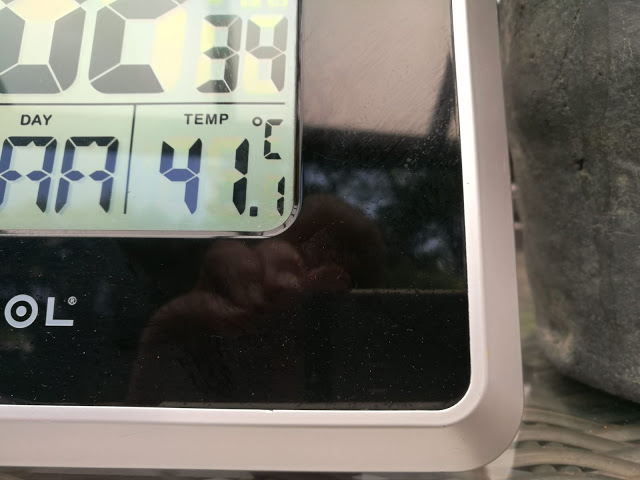 I measured an unofficial temperature of 41.4 in the shade on the 26th of July 2019
I do know there are many global warming/climate change sceptics out there, however, instead of bombarding you with loads of science and graphics, here is my pragmatic take, dealing with things sensibly and realistically in a way that is based on practical rather than theoretical considerations. Over the years, I have noted Holland is getting hotter, below are my honest views on a tricky subject.
Today temperatures for many parts of Europe and for the next week at least, the mercury is set to exceed 40 deg F, (104F). For countries such as Belgium, Holland, Germany etc, 40 deg C is extreme, our infrastructure is not built for these types of temperatures, most of us don't have airco for instance. Living in the UK, where I was born, I am used to cool, wet summers, so when I arrived here in Holland in 1995 I was pleasantly surprised by the long summers and wonderful sunshine.
Back then, if the mercury reached 30 deg C (86F) it was quite special and didn't happen very often. Ten years later the high's were pushing 35 deg C (95F). In the two-thousand-teens high 30s were becoming much more frequent, then last summer the 40 deg C (104F) ceiling was smashed when a temperature  40.4 deg C, (105 deg F) baked Holland, breaking the all-time record which was set the day before at 39.8 deg C. (104 deg F). In my back yard, I measured an unofficial temperature of 41.4 in the shade, see photo above. Hundreds of locations across Europe smashed all-time hot weather records by an impressive margin on the 26th of July 2019 with many locations beating records placed the day before on the 25th. This weekends heatwave could see many of these records broken once again.
When I arrived in Holland one of the first things I learned was ice skating, back then winters here in Holland could be very cold with temperatures reaching -20 deg C (-4F) sometimes. The many canals in Holland would freeze over and the entire nation took to the ice in a skating frenzy. as the years rolled by the cold winters stopped and by 2010 the snow and ice had all but gone, winters had become very mild, last winter, I can't remember the temperature dropping below 5 deg C (41F) which is great for the plants but not so good for the wildlife.
Hedgehogs and other animals did not hibernate this winter, after the ‘unprecedented’ mild winter. The effects and implications of this ‘unheard of’ phenomenon are yet to be discovered, but we should be worried. Reports of frogs and toads still being out in people’s gardens during winter is weird, they should have been in deep in hibernation because they are cold-blooded animals.  This was absolutely unheard of until a couple of winters ago.
Disturbing patterns show the Northern Hemisphere witnessed its warmest winter ever, the U.S.  UK and Ireland, Europe and Russia all reported warm or record warmth for winter 2019/20. Across much of the United States, a warming climate advanced the arrival of spring. Christmas was so mild in Moscow last year they had to import thousands of tons of snow to cover the streets of the capitol.
This year our summer arrived in the middle of the winter. In the first week of February temperatures here in Holland reached a balmy 20 deg C (68F). My wife and I enjoyed the weather as we sat outside in the winter sun, it was glorious and something I had never witnessed before.
Many parts of Europe enjoyed summer temps in mid-winter in February 2020. Puerto De La Cruz in Spain topping the list with a mighty, 30 deg C, (86 deg F) and Valencia hitting 29.4 deg C, (85 deg F) almost double the average temperatures for the time of the year, smashing old records.Extreme warmth across the southern half of Europe brought exceptional temperatures across Spain, southern France, and NW Italy. Dry Foehn winds have resulted in extremely high early February values with locally 26-28 °C peak afternoon temperatures. Turin and Cuneo in NW Italy reached almost +27 °C – the hottest temperatures ever recorded in Piedmont region (NW Italy) during winter! Southern Switzerland stopped at +24 °C while Valencia reported +28.4 °C! TBW
Europe recorded one of its mildest winters ever: France enjoyed its warmest winter in 100 years: Germany and Austria had their second warmest winter ever and over here at least the trend continues. As I brace myself for a week or two of summer madness here in my beloved Holland I say thank you to all the people who bought me a coffee recently, stay safe.
Climate Change 2020
Front Page Headlines
at August 07, 2020

Good interesting info Gary. Thanks for the real time update on the effects of GW in your neck of the woods! It is incredible that there are any GW skeptics at all anymore having either lived through what you are experiencing or seeing the news past few winters and summers of the north pole on fire and reaching 100F degrees making as hot or hotter then us here in FL. USA. It's incredibly annoying to still hear our president and other officials continuing to mock this subject and so many who follow that demented mind set. I suppose nothing short of trump melting on camara will ever convince the skeptics! Ha ha, good visual if it could really be!
I keep wondering how much more can we and our precious environment take before something terrible really goes off from this.

A friend of mine wrote me, he is a Dr., he said he is hearing a lot of his patients say that the sun is too hot and pinching their skin to the point they are unable to stay in the sun. I have been feeling that pinch for several years already so it was good to hear this finally from others. It is a direct result of a broken atmosphere unable to filter out the harmful UV radiation now. That's what the pinching feeling is, radiation burn! It pinches and it itches. Be careful out there!

Glad to hear from you. Funny you should mention pinching skin from the Sun, my wife has been complaining of it all summer long.

If you follow the CAMS Copernicus Atmospheric Monitoring service satellite data, you can see when the ozone layer becomes too thin for safety. At 300 Dobson Units it is borderline safe. Remember when we had the Ozone hole over the Antarctic? That was 150 DU or less. It's still there, just not all the time and not quite as low. The higher the amount of Ozone at altitude, the better. 600DU is very safe. I would consider below 300DU as unsafe, so if I go out it's pasting on the sun cream.

On the drop down menus you set it to NW Europe, and the other menu to Total Column.
There is a date slider below the pictorial map, you can set the date to every 3 hours of a day from within a week.
At midday 7th August 2020 it was 300-320DU over the UK and most of NW Europe, so yes, feeling the pinch! Luckily it has been very cloudy this morning, so I've not had my dose of skin cancer today.