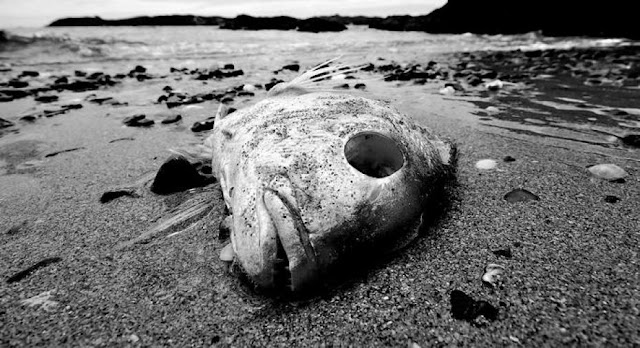 
According to Hal Bernton of The Seattle Times, the Gulf of Alaska cod populations appear to have nose-dived, a collapse fishery scientists believe is linked to warm water temperatures known as “the blob” that peaked in 2015.
The 2017 trawl net survey found the lowest numbers of cod on record, more than 70 percent lower than the survey found two years earlier.
The cod decline likely resulted from the blob, a huge influx of warm Pacific Ocean water that stretched — during its 2015 peak — from the Gulf of Alaska to California’s offshore waters.

The problem is not confined to cod, all marine life has been declining along the western coast of America, Canada and even Mexico since 2011.
Biologists tracked increases in bird die-offs, whale strandings and other events such as toxic algae blooms.
In September 2017, the U.S. Fish and Wildlife Service released a new report claiming tens of thousands of kittiwakes, murres and auklets were washing ashore dead in Alaska for the third year in a row, the total number of deaths was incalculable because many many more birds are thought to have died off the coast and died at sea.
If tens of thousands of them are dying, it's because there's no fish out there, anywhere, over a very large area!
The deadly patch of warm water along the American West Coast called the ‘Pacific blob’, has also killed thousands of California sea lions.
Many starved as they struggled to find food in an unusually warm eastern Pacific.
Strange exotic tropical fish have been reported off the coast of Alaska.
An unprecedented die off which began in 2011 along the West coast of North America when billions of sea urchins and sea stars died suddenly in what was 'one of the most unusual and dramatic die-offs marine biologists have ever recorded.
In January this year, the U.S. Federal government issues a disaster declaration for Alaska's pink salmon fishery as the true amount of dying marine life began to hurt the fishing industry.
The collapse of Alaska's salmon fishing is not the only problem hitting the North-West Coast of North America in the last couple of years, the amount of marine and bird life dying in the area is astonishing, as the list below will prove.

In November 2016 National Geographic published huge massive Puffin die off: Hundreds of birds were washing up dead on the Pribilof Islands, Alaska, and causing alarm among scientists.
They claimed the die-off was linked to climate change.
25th October 2016 – A mass die-off of sunflower starfish along the coast of British Columbia, Canada, was reported.
On the 28th July 2016 - 300 seabirds were reported to have washed up dead since May in Washington State, America.
In July 2016 Alarming number of seabirds was found dead on Victoria beaches, in Canada.
On the 17th June 2016 – A mass die-off of salmon in fish farms, due to 'toxic algae' in British Columbia, Canada.
On the 18th of March 2016: 10 dead sea lions found were on beaches of Vancouver Island, Canada.
1st February 2016 - 1 Whale and 3 dolphins wash up dead along Oregon-Washington Coast.
On the 31st January 2016: A massive die-off of fish, 'never seen before' in Snake River, Washington.
In January 2016 scientists claimed the Gulf of Alaska seabird die-off is biggest ever recorded after finding another 25,000 dead birds.
In November 2015 a report by  The federal Department of Fisheries and Oceans claimed millions of B.C. salmon had mysteriously ‘just disappeared’ in a troubling year.
In October 2015 scientists reported seeing large numbers of dead or sick sea otters turning up in the Kachemak Bay region.
In September 2015 scientists reported hundreds of dead walruses were found on a beach area in the northwestern part of Alaska.
Also in September Kodiak Island residents reported a massive number of common murres washing up dead on local beaches.
In late August 2015, there were reports of dead fish on Lake Koocanusa, Canada a scene similar to one that occurred on the lake two years ago.
It’s not entirely understood what is causing the death of thousands of kokanee salmon.
In the same month, a lack of oxygen in southern Hood Canal was blamed for killing fish, crab and other marine life, according to Seth Book, a biologist with the Skokomish Tribe who has been monitoring the marine waterway.
Through the month of August, Skokomish staff observed dead English sole and thousands of dead and dying eelpouts on the beaches.
They also found masses of dead cockles and butter clams, and on Friday, saw hundreds of crab along the beaches that were trying to get to the surface to breath.
Also in August 2015, Hundreds of birds washed up dead or dying, 'apparently starving', along the Oregon and Washington coast,
In the same week, More than 150,000 juvenile steelhead Salmon died in a hatchery on the North Umpqua River in Oregon.
August 2015: The discovery of four dead humpback whales in B.C. waters in a single week, shocked scientists just as Alaska was also experiencing a surge of whale deaths.
Also in the same week, unusually warm water temperatures and low river levels were blamed for killing salmon in the Matanuska and Susitna valleys Alaska. Hundreds of Arctic char, recently stocked by the Alaska Department of Fish and Game, have also gone belly up in Campbell Point Lake, also known as Little Campbell Lake, inside Anchorage's Kincaid Park.
The heat was blamed for massive fish die-off at Whatcom Falls hatchery in Washington on August the 6th 2015.
Two days earlier The Alaska Maritime National Wildlife Refuge was receiving multiple reports indicating a significant increase in dead and dying birds found on beaches in the Homer area over the last two weeks.
In July 2015 it was reported half of Columbia River, Washington State, sockeye salmon were dying due to hot water.
24th July 2015: A Large die-off of birds, plus fish and sea mammals were reported in Aleutian Islands, Alaska,
ANCHORAGE, Alaska: More dead whales were found in the Gulf of Alaska following the sightings of nine fin whale carcasses in late May and early June.
On the 24th of June, 1,000 tons of salmon died in a Seafood farm on Vancouver Island in Canada.
19th June 2015: Hundreds of spring Chinook salmon were turning up dead in Oregon rivers.
18th June 2015 –A report claimed 9 endangered whales were found dead during the past few weeks in Alaska.
The above report is just a snippet of the carnage along the western coast of the US and a recent report by the University of Hawaiʻi at Mānoa has revealed almost 50% of fish consumed on the islands of Hawai’i were contaminated with caesium 134 the radioactive finger-print of Fukushima.
While the report declines to claim the Fukushima radioactive plume has necessarily reached the Hawaiian Islands it did reach the established fishing grounds across major migratory paths northeast of the islands…

The report also showed that migrating organisms can transport the Fukushima-signature (caesium 134) over significant distances as they showed detectable 134Cs (6.3±1.5 Bq/kg) in Pacific bluefin tuna caught off the California coast only a year after the incident.
Another study found caesium 134 in longfin tuna (Albacore) along the western coast of the US just one year after the Fukushima disaster.
With no known technology capable of fixing the stricken Fukushima plant, radiation levels in fish species will only rise in the coming years, culminating in the death of the Pacific.