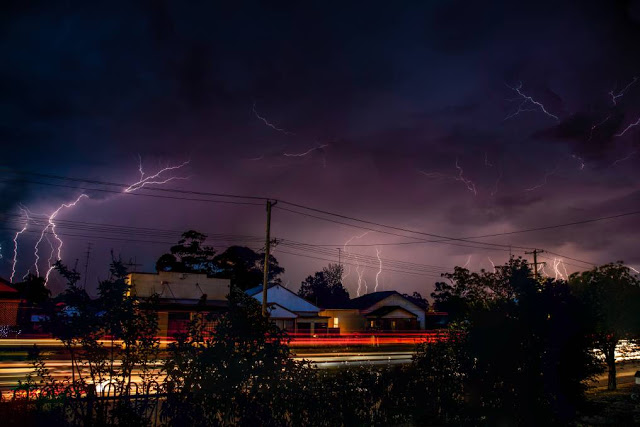 A sudden storm has sprung a surprise on Auckland, with barrelling thunder, hundreds of lightning strikes and large hailstones thumping the region on Tuesday.
MetService has issued a severe thunderstorm warning for Northland, Auckland, Waikato and the Coromandel.
There were 870 lightning strikes recorded across the country between 11am and 4.45pm, with 600 of those in Auckland, from 12.30pm to 2.30pm a MetService spokeswoman said.
Earlier today residents were warned to stay indoors if they heard thunder.
A large number of lightning strikes prompted Niwa to issue a warning to get off the water.
The storm manifested itself in hyper-local pockets, with some Aucklanders not experiencing any of the rain, hail or thunder that struck other parts of the city.

Last week reports of a flash Storm lasting "two intense minutes" devastated an Australian town without warning blowing washing machines and dryers down the street.
IT lasted barely two minutes but felt 'like a typhoon' when 100km/h winds tore through the Hunter Valley town of Kurri Kurri.
Dozens of buildings on the main street were badly damaged with the town library, pub and public school bearing the brunt as the ferocious storm hit at about 2pm.
Two women had to be rescued by police after becoming trapped when the roof of the library collapsed.
A lightning strike ripped a hole in the roof of the Kurri Kurri Hotel and did it so rapidly that patrons didn't even have time to get off their stools.
"It happened really quickly, the chimney blew over.
Mark Roberts said he had "never seen anything like it".
"There were hailstones coming in.
You could barely see out the window," Mr Roberts said.
Baker Cheryl Baker said the whole town was "devastated" by the "flash storm" which brought trees and power lines down.
"Washing machines and dryers from the second-hand shop got picked up and have been flying down the road with the storm," she said.
"There are trees down on cars and it is raining really heavy.
The lightning struck the pub and there is now a hole in its roof.
The library roof has also fallen onto the power lines over the Centrelink building.
We've got no electricity at all."