September 2017: The most devastating month in recent history! A look back at the devastation of 30 days which changed millions of lives forever! 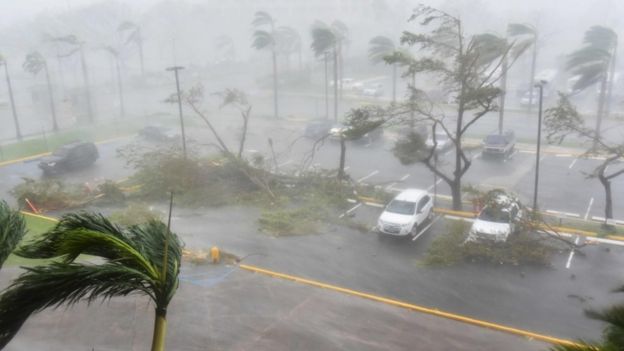 Photo BBC
It was probably the most destructive month ever in modern times resulting in more than 50 million people being evacuated around the world due to flooding, hurricanes, typhoons major quakes and volcanic activity.
September 2017 was like no other month on record as disaster after disaster rained down on our vulnerable planet changing millions of lives forever.
This article will look back at the devasting month day by day as we relive September 2017 the most devastating month in recent history.

On September the 1st; at least 1,200 people died from flooding in India, Nepal, and Bangladesh as troops struggled to reach dozens of people trapped after a building collapsed in Mumbai.
Since its start this year devastating floods have killed more than 1,000 people across South Asia and affected close to 40 million in northern India, southern Nepal and northern Bangladesh.

On September the 2nd; record temperatures were shattered in San Francisco as temperatures reached 45 deg C 115 deg C.
On the same day, The Big Wobble asked; is this the calm before the storm?
August continues a massive downward trend in quakes of mag 6 or higher:
Should the alarm bells be ringing?
They certainly should have been!
As the Gulf Coast continued to real from the impacts of hurricane Harvey, we were warned Hurricane Irma could strengthen to Category 5 next week.

On September the 3rd; a new cluster of 43 quakes overnight just 60 miles from Yellowstone the biggest being an impressive mag 5.3, an ongoing earthquake swarm at Yellowstone volcano is now one of the biggest ever recorded, with over 2,300 tremors since it began in June.
A 6.3-magnitude seismic event was recorded in North Korea, the U.S. Geological Survey says was a "mining explosion," in what may be another nuclear test, it measured 6.3 on the Richter scale.

On September the 4th; a shallow mag 6. quake, near the Sandwich Islands, was the first major quake of September and the 66th of a record quiet 2017.

On the 5th of September; the first volcano eruption of the month occurred on Fernandina Island in the Galapagos of Ecuador.
Meanwhile, Sunspot AR2673 expanded more than 10-fold in a single day: A chance of X-Class flares was predicted for the first time since May 2015.

On Wednesday the 6th of September; the most powerful hurricane ever recorded in the Atlantic basin as Irma with 185mph winds swelled to the size of FRANCE!
Later in the day, a Hurricane Irma update claimed Barbuda, Saint-Barthelemy and Saint Martin battered by near 200mph winds.
And then...Something incredible happened!
BOOM! More signs and wonders: A X9.3-class solar flare-the strongest solar flare in more than a decade EXPLODED from giant sunspot AR2673, it was to be the equal 14th biggest solar flare ever recorded.

On Thursday, 7 September 2017; Hurricane Irma turns deadly as THREE hurricanes form in the Atlantic region for the first time in seven years.
A mag 6.1 - 249km WNW of Chichi-Shima, Japan was the second major quake of September and the 67th of 2017.

On Friday, 8 September 2017; the biggest Mexican earthquake in 100 years a Mag 8.2 triggers a tsunami: It was confirmed the biggest quake in Mexican history.
Meanwhile, Earth was being battered by a severe G4-class geomagnetic storm with solar winds blowing at nearly 800km/sec. The severe storm is from the monster X9-class solar flare, the biggest since 2005 and the equal 14th ever recorded which exploded from our Sun on Wednesday as a new Coronal Hole was emerging over the sun's northeastern limb.

Monday, 11 September 2017; BOOM! Departing shot: Sunspot AR2673 blasts off another monster X8-class flare as it turns away from Earth and It could be back in two weeks.

Sunday, 17 September 2017; Typhoon Talimd dumped almost 10 inches of rain every hour with winds of over 100mph as it hit Japan.
As Hurricane Jose weakens another one forms, tropical storm Maria was expected to become a strong Hurricane category 4 by Tuesday.

Tuesday, 19 September 2017; Hurricane Maria smashes into Dominica and records the second category 5 hurricane in a week in the Atlantic.
While 500,000 people are evacuated from Japan and China with the heaviest rain seen in 40 years from Tropical Storm Talim.
Another massive quake hits Mexico!
A devastating mag 7.1 kills hundreds and causes incalculable damage.

Wednesday, 20 September 2017; another major quake strikes New Zealand just hours after the mag 7.1 in Mexico as a large Coronal Hole on our Sun turns to face Earth.

Wednesday, 20 September 2017; "This is a natural disaster, we cannot avoid, we can't stop it exploding" Bali's Governor warns of the imminent eruption on Gunung Agung, volcano.
"You have to evacuate - otherwise, you are going to die," Puerto Rico Gov. Rossello claims Maria "promises to be much more devastating" than Hurricane Irma...
With a 3.5 million population deadly Hurricane Maria begins to rip the heart out of Puerto Rico with winds of 150 mph (250 km/h).
A mag 6.1 - off the east coast of Honshu, Japan, the same area as the 2011 Fukushima disaster.

Thursday, 21 September 2017; another major quake in a period of great unrest around the world: M6.4 - Vanuatu is the 4th major quake in the last 36 hours.
The strongest hurricane to hit Puerto Rico in more than 80 years has "destroyed everything in its path."

Saturday, 23 September 2017; just one day into spring and Australia has its first heatwave with temperatures soaring past 40 degrees Celsius (105deg F) in NSW.
Another major quake in Mexico during a period of great unrest around the world: The 3rd major quake to hit Mexico this month.

Sunday, 24 September 2017; Mexico's colossus Popocatepetl volcano erupts ash and gas into the sky after three major quakes and massive devastation has hit the area this month.

Tuesday, 26 September 2017; a mag 6.4 - South of the Fiji Islands is the 10th major quake of September and the 75th of 2017.
Pacific Ring of Fire was flexing its muscles!
Now 6,000 evacuated from Vanuatu's northern island amid fears of the imminent volcano eruption.

Wednesday, 27 September 2017; Bali's imminent Mount Agung eruption could cause "A year without summer" bringing Earth's warming back into balance as 100,000 now evacuated from the area.

Thursday, 28 September 2017; The entire Island is now evacuated as a state of emergency has been declared on a Vanuatu island from the threat of a major volcanic eruption.
Thursday, 28 September 2017; now thousands of birds are dead thought to have asphyxiated by gases and vapours of Agung volcano as the colossus prepares to blow.
Fish fall from the sky with rain in northern Mexico.

Saturday, 30 September 2017; Mount Agung volcano on the Indonesian island of Bali is now responsible for almost 150,000 evacuees as eruption draws ever closer!
Costa Rican colossus Turrialba Volcano erupts and spews gas and ash 4,140 meters above the sea level as another volcano gets in on the act.
A second Indonesian volcano erupts! Mount Sinabung North Sumatra spews ash and gas 2.5 kilometres into the sky...