Satanism linked to mysterious disease causing childrens legs to swell, while in anguish and falling into a trance in Zimbabwe 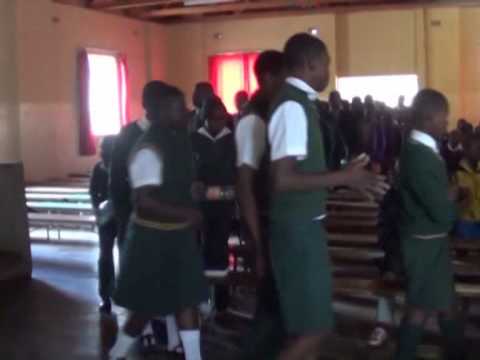 The government has sent environmental technicians and doctors to Biriiri High School in Chimanimani where 20 students have been sent home after being affected by a mysterious disease causing their legs to swell, while in anguish.
Authorities at the mission school run by the United Baptist Church (UBC) told The Herald that they were now clueless on the source of the rare crisis, while some parents linked the problem to suspected Satanism.
Sources told The Herald that this term at least 20 children were affected by the problem that saw them falling into a trance, shouting the names of some staff members whom they accused of being perpetrators of the evil practice.
Last term, another group of 12 pupils at the school suffered the same problem, but the nature and cause of the "disease" was still a mystery to school authorities, doctors and parents.
Biriiri High School station head Reverend Charles Ziyomo said the environmental health technicians, medical doctors and other experts were still trying to establish the cause and the nature of the illness. "We are still investigating the matter," he said in an interview.
"Some of our children complain of swollen legs and the severe pain.
As the school, we have taken them to our local clinic.
"They were referred to Mutambara Mission Hospital where the doctors are still trying to establish the nature of the problem and the cause thereof from a medical point of view.
We ended up asking the parents to take their children home in cases where the hospital was not being of assistance."
Chief Raymond Saurombe of Biriiri said the traditional leadership met the church's top brass and the school authorities over the crisis and sternly warned the staff members suspected to be behind the satanic practice.
"I had to summon the UBC leadership from their head office in Harare and we discussed the problem," he said.
"The actual problem is not really known, but we have had reports of satanism linking some teachers at the school.
"We heard that the 'possessed' children would mention the names of some teachers as culprits.
I called the staff members and issued a stern warning against anyone to be mentioned again in such mysterious and evil practices.
If anyone's name is mentioned again, we, as the traditional leaders, will now summon them to court." Since Friday when the meeting was held, Chief Saurombe said, the situation had been calm at the school.
Manicaland provincial education director Mr Edward Shumba said he was already seized with the matter and that he had since assigned his officers to investigate the chaos.
"We got a complaint of the swelling of legs and related problems at Biriiri High," he said.
"I am sending my team to investigate the problem at the schools.
After the investigation, we will then be able to map the way forward."
Parents on various social media platforms had planned to stage a demonstration against the school authorities but later calmed down after news filtered that the school authorities had asked for a meeting with the School Development Committee.
A parent who spoke on anonymity said:
"Our children are being used for satanic purposes.
We cannot just watch as they are sent home one by one."