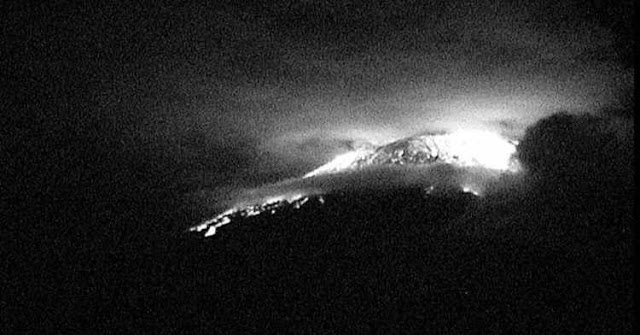 Photo Cenepred Mexico
Central Mexico's Popocatepetl Volcano registered a mild eruption on Sunday, sending a plume of smoke and steam two km high, authorities said.
The eruption registered at 9:04 a.m.local time (1404 GMT) was the fourth in 24 hours, according to the National Disaster Prevention Center (Cenapred) of Mexico.
"In the past 24 hours, the Popocatepetl Volcano monitoring system registered 88 low-intensity exhalations and four explosions, including two on Saturday at 12:52 p.m. (1752 GMT) and 8:50 p.m. (0150 GMT Sunday), one on Sunday at 6:22 a.m.(1122 GMT) and this latest one," said Cenapred. The agency also detected "a light emission of gas and steam to the northeast" of the volcano, located some 70 km southeast of the capital Mexico City, home to more than 20 million people.
The Popocatepetl Volcano has been mildly active since Dec. 21, 1994, and a "yellow phase 2" caution alert has been in place ever since, meaning people must keep outside a 12-km radius around the crater.
After a powerful 7.1-magnitude quake struck central Mexico on Sept. 19, the volcano registered two eruptions of steam and gas in the following four days.
However, officials say they have not observed any significant uptick in volcanic activity in relation to the quake.

Today's eruption is the 9th to occur in just over a week around the ring of fire, the impressive list of volcanoes showing activity this month is as follows: Indonesia: Lewotolo Volcano, Mount Agung and Mount Sinabung, Mexico: Colima and Popocatepetl Volcano, Costa Rica: Turrialba Volcano, Guatemala: Fuego Volcano and last but not least, Vanuatu: Manaro Voui Volcano, Japan: Shinmoedake.