Another weather record tumbles! Category 3 Hurricane Ophelia is now the farthest east a major hurricane has ever existed in the Atlantic Ocean 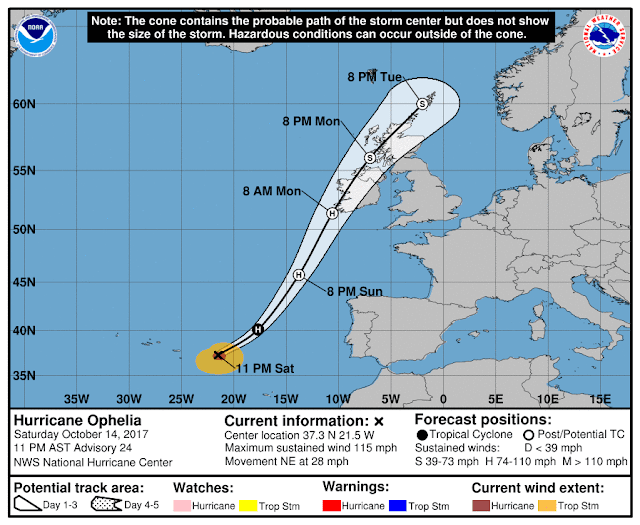 Credit NOAA
Strengthening category 3 Hurricane Ophelia is now the most powerful hurricane so far east ever recorded and it is causing mini record heatwaves all over Western Africa, the UK and Ireland and Western Europe.
The government of the Canary Islands has issued a heatwave alert for the holiday hotspots of Fuerteventura and Lanzarote. High temperatures in the range of 34 to 38 C, 100 deg F are being forecast. The 112 emergency services have issued advice to holidaymakers to help them cope better with the unseasonably high temperatures.
Meanwhile, parts of the UK and Western Europe will see temperatures of 25 deg C, almost 80 deg F on Sunday and Monday.
After weakening Hurricane Ophelia is expected to make landfall early Monday along the south coast of England.
On Saturday, Ophelia strengthened to a Category 3 hurricane. According to Philip Klotzbach, a meteorologist at Colorado State University, this is the farthest east a major hurricane has existed in the Atlantic Ocean.
Despite losing its tropical characteristics, Ophelia will still be a powerful windstorm as it tracks near or over western Northern Ireland and western Scotland late on Monday into Tuesday, with wind gusts up to 90mph.

Ophelia became the 10th consecutive storm to grow into a hurricane in the Atlantic this season which has now tied the record last set in the late 1800's.This season has recorded 6 major hurricanes including three which reached the highest category 5 strength along with 15 named stormsOphelia is heading North East and is expected to hit the UK early Monday after a weekend of summer temperatures.It is the incredible strength of  three category 5 hurricanes Harvey, Irma and Maria which caused so much devastation which will be remembered this year, and with October a big month for Atlantic hurricanes there could be more to come