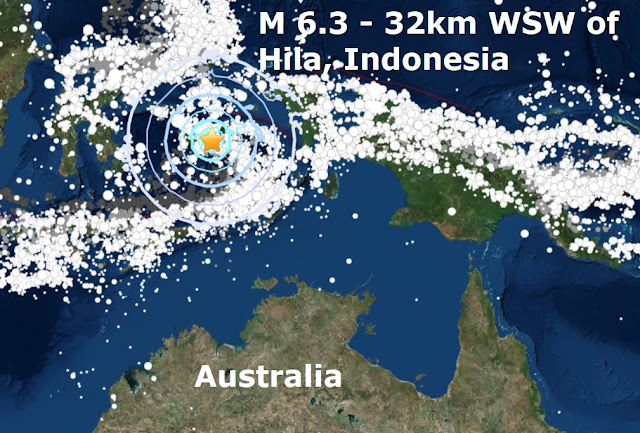 USGS
No Tsunami Warning, Advisory, Watch, or Threat
Green alert for shaking-related fatalities and economic losses.
There is a low likelihood of casualties and damage.
A magnitude 6.3 - 32km WSW of Hila, Indonesia is the 2nd quake of today, it's the 11th major quake of October and the 85th of 2017.

As a large Coronal Hole opened up in the southern part of the Sun's atmosphere facing Earth yesterday a major quake was on the cards, which was predicted here.The solar wind being ejected from the hole on the Sun should reach Earth some time on the 2nd of November.

Solar wind flowing from this southern coronal hole should reach Earth on Nov. 2nd, possibly causing magnetic unrest around the poles. Credit: NASA/SDO.Polar auroras and magnetic unrest are likely when the gaseous material arrives and we could witness major quakes up to the arrival of the solar wind on the 2nd of Nov. Home