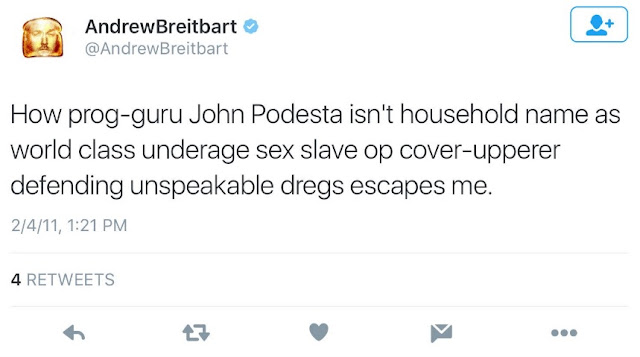 Andrew Breitbart Tweets have turned up in the alleged #Pizza scandal which bring more speculation regarding the journalist’s death in 2012, was he about to reveal John Podesta was involved in a paedophile ring with other Washington DC A-Listers?

#Pizzagate has gone viral, nuclear even, after Julian Assange; owner of WikiLeaks released hacked emails from John Podesta who is the former chairman of the 2016 Hillary Clinton presidential campaign. He previously served as chief of staff to President Bill Clinton and Counsellor to President Barack Obama. The leaked emails reveal strange coded messages which so called ‘conspiracy theorists’ claim refer to a paedophile ring where children are bought for sex by government leaders. It’s a story which has legs and just keeps on growing and to throw petrol onto the fire so to speak several Tweets have emerged from 5 years ago by right-wing journalist Andrew Breitbart in which Breitbart calls Podesta an underage sex slave amongst other colourful quotes.

Andrew Breitbart died on March the 1st 2012 out walking in his neighbourhood Brentwood in Los Angeles, an autopsy by the Los Angeles County Coroner's Office showed that he had hypertrophic cardiomyopathy, with focal coronary atherosclerosis, and died of heart failure. Conspiracy theories arose about his death. The toxicology report showed, "No prescription or illicit drugs were detected. The blood alcohol was .04%. No significant trauma was present and foul play was not suspected. “Bill Whittle, a personal friend of Breitbart, had said that Breitbart had had a "serious heart attack" just months before his death but his coroner, the one responsible for declaring his cause of death, turned up dead from arsenic poisoning within hours of the release of Breitbart’s preliminary autopsy report fuelling the speculation and the conspiracy theories concerning his death remain today especially as he is now linked to the #pizzagate controversy.

On the 4th of February 2011, just over a year before his death he tweeted; ‘How prog-guru John Podesta isn't household name as world class underage sex slave op cover-upperer defending unspeakable dregs escapes me.’ And in another Tweet, referring to the owner of Media Matters for America, David Brock who is the ex-boyfriend of Comet Ping Pong owner, James Alefanti, the Pizza restaurant in the centre of the alleged paedophile ring which has been frequented by Barack Obama and Hillary Clinton he wrote; Early on did John Podesta imagine his baby @mmfa (Media Matters for America) would be covering up for underage sex slave ops & H8 crimes against blacks?

AndrewBreitbartVerified account‏@AndrewBreitbart
Early on did John Podesta imagine his baby @mmfa would be covering up for underage sex slave ops & H8 crimes against blacks?

Just where is Julian Assange?


If you are unfamilliar with the Pizzagate controversy regarding John Podesta's leaked emails, you can find all the information here #pizzagate