The CME was hurled into space on Jan. 14th by a dramatic twisting eruption in the magnetic canopy of sunspot AR3182, seen on the SDO movie above, lower right, and below on the giff.  AR3182 is now turning away from Earth around the sun's Western limb!

The first two weeks of 2023 have seen a plethora of solar activity recording three X-Class Flares. With a barrage of large sunspots emerging from the eastern limb of the sun, we can expect more high-energy activity next week.

Of course, high active solar energy is usually accompanied by major quake activity (mag 6 or higher)  and the last few days have been no exception. This morning a very deep magnitude 6.3 quake rocked the Izu Islands near Japan, see the map below.

Earlier a magnitude of 6.0 was recorded in the Indonesia region of Nias. The two major quakes, (mag 6 or higher bring the total to 5 so far in 2023 with a very powerful magnitude of 7.6  which rocked Indonesia on Jan 9. 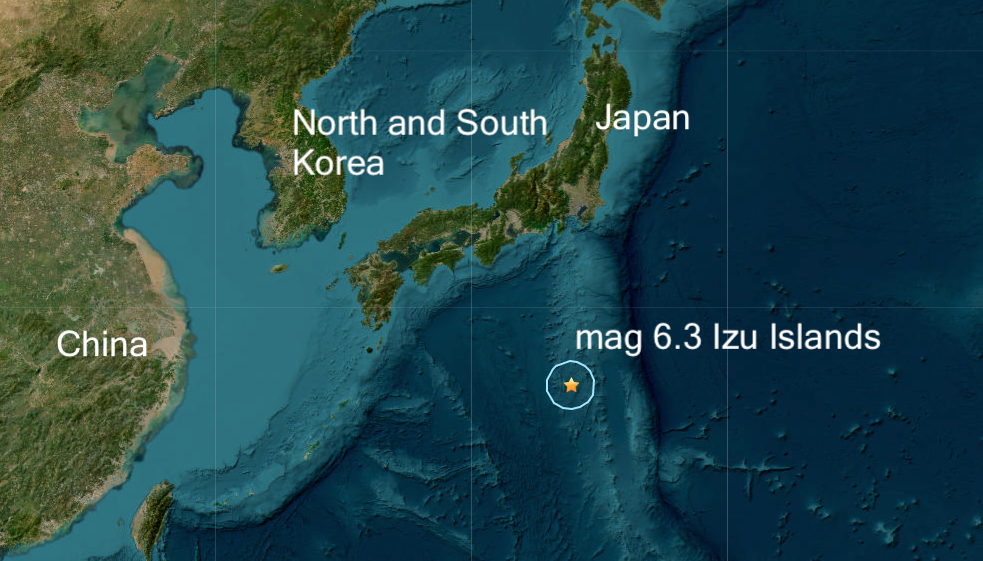 Recently and since reading all you post on this uptick in solar activity that links to the uptick in earthquake activity, I have found some interesting information to consider.
1) there have been news links online about USGS suppressing earthquake data (deleting quakes as Gary has implied), yes! They are definitely doing that.
2) Bible studies showing that what is written in Revelation about fire and brimstone could be from volcanic eruption(s) triggered by earthquake activity.
*True, all volcanic activities are started by a quake first.

3) then, this morning I found this link: http://allnewspipeline.com/Geoengineering_The_World_Into_A_Death_Spiral.php
In that link are 2 good video's of which the most truth is in the first one by Dane Wigington of geoengineeringwatch dot org, on their web site. The news link subject is about a surge of "sudden deaths" in whales going on now that they are washing up on beaches from "unknown" disease causes. Oh its always such a mystery why life forms are dropping dead abnormally...not such a mystery really, if you know what's really going on that is!
Well news seems to be promoting the theme of these whale deaths (in N.J. & FL) being caused from wind turbine construction in the oceans and calling for a halt until they figure out this big mystery!

What's going on in our oceans?! Actually the answer is....ALOT! Alot of sinister activity with my constant complaint of geoengineering at the helm of it all! All these earth happenings are connected!! The solar part of that equation is really an amazing facet. I encourage readers to explore it! Ask God to show you truth and He will!

Aside from all that and inline with many other end of days writings is the common thread of dating the final year of our world and when Christ returns....between 2025 - 2030! It's no conspiracy talk, if our biosphere collapses which it is in the process of doing, that is the end of this world yes.
Remember Jesus told us that just like the days of Noah, people will be partying, marrying, etc etc like normal and then the end comes upon them without warning. ... well they had plenty of warnings but chose not to believe them.
I must say, from my perspective here in swfl since hurricane Ian was purposely put upon us, the world is ending yet people are choosing to ignore the sights and signs of it through insane behavior purchasing severely storm damaged homes with the thinking that after rehabbing the house we can flip it and get rich! Totaling disregarding the reasons FL is so sought after, our environment and warm climate. Well they ignore the fact that our Gulf ocean is poison now, they continue to advertise best fishing blah blah blah when there are no fish or no healthy ones left. (I could go on an on describing more ocean poisoning but too much to write!). My advice for my area is DO NOT PUT EVEN ONE TOE IN THE WATERS!
It's just so ignorant and irritating because it means acceptance to the entire poisoning of our ecosystem. That's what is so upsetting, no cures or truth, just bags of sh%t lies and people accepting the environmental poisoning that never stops and is in all places on this earth. Yes, we are in climate collapse right now.