A TICKING TIME BOMB! It's another near miss! Incredibly, the fourth in just over a year! A powerful mag 7.4 earthquake has rocked north-east Japan and is reported to have cut power to two million homes and has struck just 40 miles east of Fukushima. 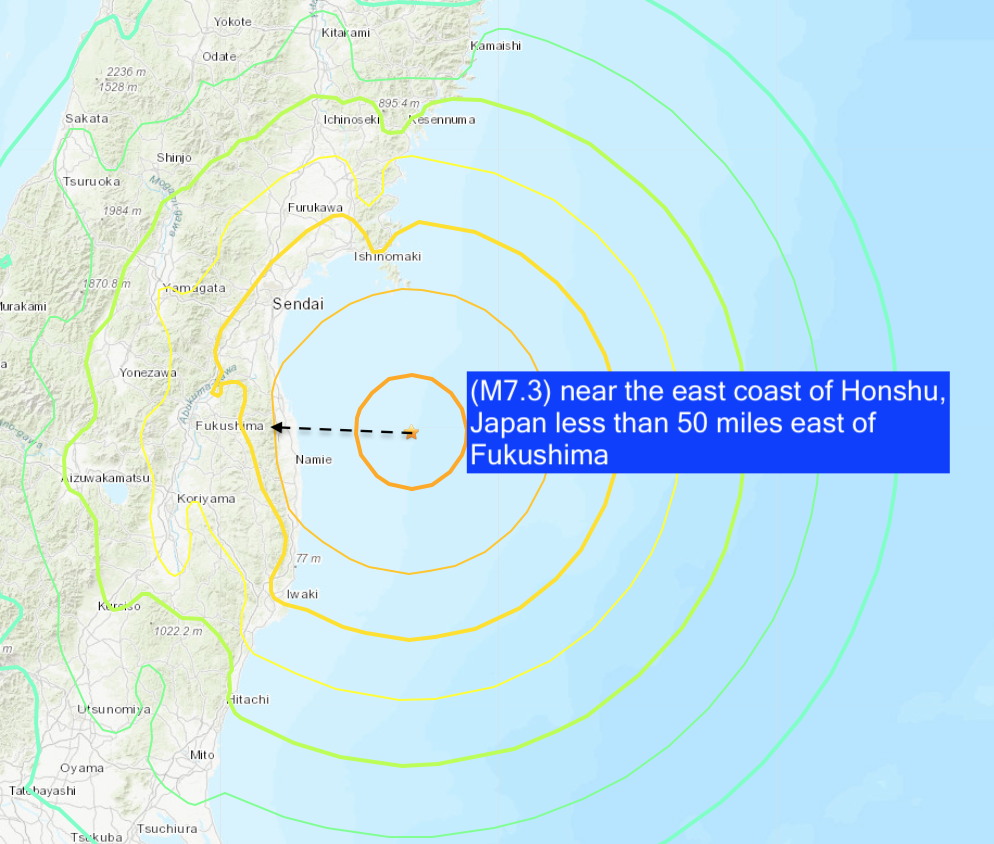 Credit USGS
A powerful earthquake has been recorded in north-east Japan and is reported to have cut power to two million homes and has struck just 40 miles east of Fukushima. The tremor was recorded at magnitude 7.3 and in some areas is said to have reached 6-plus on Japan's shaking intensity scale, making it too forceful for people to stand, according to the BBC—The massive quake also followed a mag 6.4 fore shock. People living in the Fukushima, Miyagi and Yamagata prefectures have been told to expect aftershocks. The quake took place at 23:36 (14:36 GMT), the US Geological Survey said. An advisory for tsunami waves of one metre (3.3ft) has also been issued for parts of the north-east coast. The massive quake comes exactly 11 years and 5 days since the Great earthquake of Honshu killed an estimated 25,000 people died.
A TICKING TIME BOMB! It's another near miss! Incredibly, the third in just over a year! On the 10th anniversary of the 2011 Fukushima disaster a second major quake, a mag 6.8 rocked the stricken nuclear plant just three months after a mag 7.0 rocked the same area in February 2021—Why would any body, let alone a government allow a nuclear power plant directly above a major seismic fault line? More here
Todays major quake (mag or higher) is not insignificant, yes it is a large powerful however, it's the 35th major quake so far this year which is considerably high, although last year at this stage, 03/16/21, 45 had been recorded which was even higher—2020 at this time had recorded 24, 2019-also 24, 2018-25 and 2017-just 16. The highest ever number of major quakes, mag 6 or higher in the first 46 days of the year was 2011, the year of the Fukushima disaster, 87 major quakes had been recorded—incredibly, 54 of them, fore-shocks and after-shocks has occurred off the east coast of Japan.
Earthquakes-2022
Home
at March 16, 2022

Dear Gary and readers of the Big Wobble,

I am starting to feel a little better after the solar storms so I'm back to reading your web sight, hands down my favorite. I read this and just have to wonder, how long until Fukushima makes the ocean so full of radiation that I can not even go to the Cook Inlet to read the latest levels of radiation our salmon are oozing out? Yep each year the level reads higher. How long until the book of Revelations prophecy of the one third of the sea becoming blood? Will that little ticking time bomb called "Fukushima" be a large part of the death of the sea?

Wow, lets look at the bright side. Toss those hot dogs into the Pacific Ocean and they will cook all by their selves in the near future!!! No need to build a camp fire that will pollute our air, lets save the earth and kill less trees that fuel beach camp fires. Hey kids, swim out there and retrieve dinner before it drifts away. Wanna go beach camping anyone?

Just my thoughts from one disgusted Alaskan!

Hey buddy, what a pleasant surprise.

Solar Cycle 25 is proving to be a handful not just for the dead-heads... You are in my prayers fella!

I think these earthquakes are associated with the energy absorbed by the earth during solar storms.

A severely diminished ozone layer full of holes is fueling these solar storms effects on all earth systems that are already and also being negatively effected by rising methane gas and its emissions. Yes "Unknown", you see correct!
Ozone layer is earth's protective shield from solar radiation, no ozone no protection.
Solar UV chart is measured in 4 stages: UVA, UVB, UVC, XRAY.
California as recently seen slivers of UVC and XRAY. We know we have uva & uvb, sunscreen lotions tell us that. No ozone and high methane readings reduce oxygen levels. One symptom of methane gas poisoning is shortness of breath. We are there, it's not "coming", it's "here"!

Russia is littered with methane gas blow out holes in its north corridor and ice melt at its northern coastline has practically disappeared. Most, if not all, remaining glaciers are black ice which is dying ice. Once it's black it cant go back. Jet stream broke last summer.
Apply all this reality to events occurring and think.
How are we still here?

*correction in my comment post....Arctic temp increase 70 - 90C, sorry that should read 70 - 90F, Fahrenheit not Celsius.
The Greenland 24C is correct and approx translates to 70 -90F. A massive increase!
Also (maybe a warning) to add to my information, a week old report I just watched that gave an opinion prediction of our reality time frame from the current climate monitoring data I mentioned in my post, it said: "based on the current trajectory of UV radiation escalation (thus ozone decline) we may only have 18 months until functional collapse of the ozone layer ocurrs".
No shit!