Almost 5 million acres destroyed 34 deaths, many more missing and thousands of homes burnt to the ground as the scale of the west coast fires become apparent: Mobile morgue set up in Oregon: A thick, blanket of smoke trapped by mountain ranges on either side in Washington State. 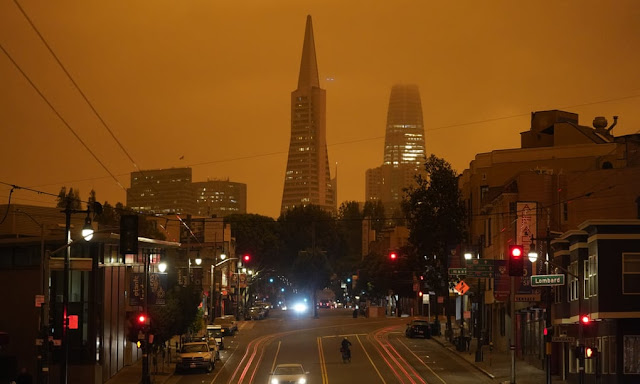 San Francisco’s Transamerica Pyramid and Salesforce Tower are seen amid daytime smoke from wildfires on Wednesday. Photograph: Eric Risberg/AP
Weeks of dry, hot weather have fueled historic wildfires along the West Coast that have killed more than 34 people and reduced thousands of homes to embers. Firefighters have been battling blazes in the region, which have consumed more than 4.7 million acres, as dry grass and high winds have created tinderbox conditions. But rain this week could bring much-needed relief to some parts of the Northwest, giving firefighters time to gain headway against the deadly flames. Red flag warnings are still in place from northern California into Southern Oregon, where fire danger remains high but air conditions are improving.
California wildfires kill 25 people
More than 17,000 firefighters are on the front lines in California battling more than two dozen large fires. At least 25 people have died and 3.3 million acres have burned since the beginning of the year. Since August 15, when the state's fire activity elevated, there have been 25 fatalities and over 4,200 structures destroyed. Gov. Gavin Newsom told reporters Wednesday that since 1980 the state's average temperature between June and September has increased from roughly 71 degrees to 74 degrees. "While that may not seem significant - three degrees - it is profoundly impactful," he said. "Average temperatures in the state of California during these summer months increasing over the last number of decades is a direct cause and effect to the experience we're currently having,"
Newson noted that fires seasons have become tougher over the last decade. Last year, despite several high-profile fires, saw 277,000 acres consumed by flames, compared to 3.4 million acres so far this year, he said. This year's deadliest fire has been the North Complex, with at least 15 deaths and more than 273,000 acres burned. It was 36% contained as of Wednesday. It is the fifth deadliest fire in state history.
The Butte County Sheriff's Office has identified 10 of 15 victims, who range in ages from 16 to 79. The August Complex Fire, the largest in state history, continues to burn in Northern California. It has consumed 817,952 acres and is 30% contained. "With no significant precipitation in sight, California remains dry and ripe for wildfires," said Cal Fire. A warming trend returning over the weekend will increase the fire danger. But smoke conditions and visibility are improving in northern California, according to NWS Bay Area.
Further south, air quality remains an issue with smoke advisories issued for the Bobcat and El Dorado fires. The El Dorado Fire, sparked by gender reveal gone awry, has consumed more than 18,000 acres and is 60% contained while the Bobcat Fire has consumed more than 44,000 acres and is at 3% containment. Portions of foothill cities of Arcadia and Sierra Madre are under evacuation orders.Mobile morgue set up in Oregon
At least eight people have died and 16 more are missing among the 29 fires in Oregon, according to the state's fire dashboard. The Marion County Sheriff's Office said in a news release investigators identified two victims in the Beachie fire as 41-year-old Justin Cook and 71-year-old Cathy Cook, both from the city of Lyons. The Cooks were located near their property, the sheriff's office said in the release.
A mobile facility for the medical examiner has been established in Linn County as officials prepare for the possibility of more fatalities. Despite deadly conditions, some residents opted to stay behind to protect their homes from incoming flames. Darren Richardson ignored evacuation orders as the Beachie Creek Fire closed in on his neighbourhood, CNN affiliate KATU reported. "My house is still there, my whole block is there because we went up there and fought it," Richardson told KATU. "I've been there, I watched the town burn down, I was there for 14 hours trying to put it out with other people." Richardson was able to save his home but most of the town was burned, the affiliate said.
A federal disaster declaration has been approved for the state to help fund the state's recovery and Oregon's Congressional delegation is urging Health and Human Services (HHS) Secretary Alex Azar to declare the wildfires in Oregon a public health emergency. "This decision will make more Federal aid available to the State and provide resources needed for our communities to rebuild," Rep. Peter DeFazio (D) said in a tweet Tuesday. DeFazio wrote that he was told of the decision by White House Chief of Staff Mark Meadows. "Oregon is resilient, but to fight fires on this scale, we need all the help we can get," tweeted Gov. Kate Brown. "Grateful we've been quickly granted a Presidential Disaster Declaration, helping provide support like damage assessment teams, search and rescue, debris management, shelter and medical assistance."More than 620,000 acres burned in Washington
In Washington, more than 620,000 acres have burned in recent weeks, creating a thick, blanket of smoke trapped by mountain ranges on either side. Two hundred structures have been destroyed and at least one person has died - a child in the Cold Springs fire near Omak. During a press conference Tuesday, Gov. Jay Inslee called the air quality "oppressive."
He said the wildfires have resulted in the most consecutive days of hazardous air quality since the state began regular monitoring nearly two decades ago. "Now our air quality I know is oppressive, and it remains unhealthy at best and hazardous at worst according to our state," Inslee said. " Across the state, we have concerns at the air outside right now is at historically polluted levels." Two hundred miles of power lines are down in central Washington and several hundred utility poles have burned, the governor added. The smoky skies have prompted Alaska Airlines to suspend flights to Portland and Spokane.