Has the Coronavirus put Al Gore, Greta Thunberg et al into an embarrassing corner: As the world scrubs itself of Carbon Dioxide emissions will our planet cool down? 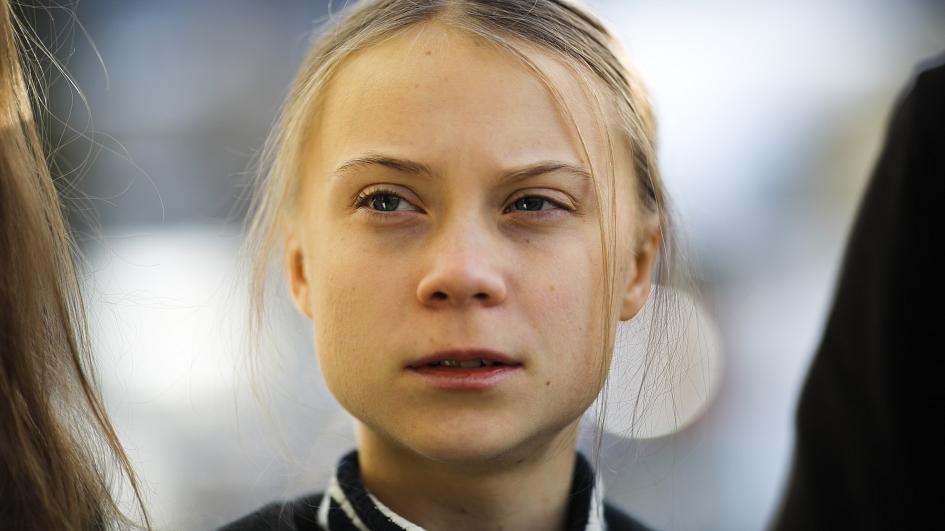 Will it be back to school for Greta? Credit Euronews.

We have a very interesting scenario developing around the world ladies and gentlemen. Al Gore, Greta Thunberg et al, are going to be left with egg on their faces as the use of carbon dioxide emissions drop drastically (which they blame for global warming) due to the global Convid-109 lockdown, as factories and fuel emissions decline world-wide. March brought a substantial (more than 45 %) drop in global commercial air traffic. According to their mantra, as co2 use drops so will the temperature of our planet.

Will the planet keep on warming? I personally think so, already NOAA is predicting above-average temperatures across the US, this spring, as well as above-average precipitation in the central and eastern United States. Significant rainfall events could trigger flood conditions on top of already saturated soils. 2019 was the wettest year in the U.S., in many years devasting crops the whole year through.

Above: Earth Wind Map showing how the world looks today regarding the cancer-causing particulates PM2.5, (orange) which have been causing devasting smog in Indian, China and Indonesian cities this year. The smog has thought to have brought premature deaths to hundreds of thousands of people. Below the same photo but from 28th of November 2019, look at the difference. India, China along with other countries producing dangerous amounts of the cancer-causing particulates PM2.5, (orange) In just five months the climate is busy cleaning it's self up. 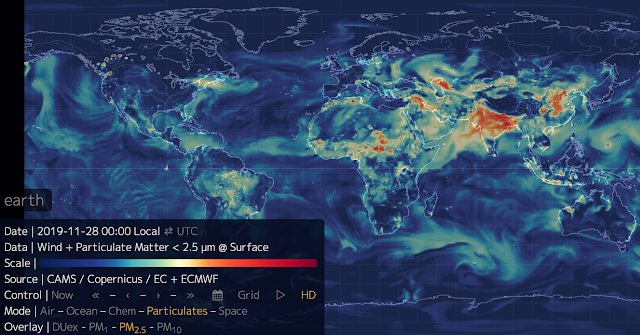 The Coronavirus lockdown is leading to a huge drop in pollution across Europe.

This animation, using data from the Copernicus Sentinel-5P satellite, shows the nitrogen dioxide concentrations from 20 December 2019 until 16 March 2020 – using a 10-day moving average. The drop in concentrations in late-January is visible, coinciding with the nationwide quarantine, and from the beginning of March, the nitrogen dioxide levels have begun to increase. ESA

OUR SUN IS BLANK, REALLY BLANK

Deep Slumber, credit SDO Our Sun, on the other hand, another aspect of global warming, is actually in hibernation.

According to Spaceweather.com, OUR SUN IS BLANK, REALLY BLANK: 2019 set a Space Age record for spotless days. The sun was blank 77% of the time last year. 2020 is on the same pace. So far this year, the sun has also been without sunspots 77% of the time. Will Solar Minimum never end?

Forecasters believe sunspot counts will begin to increase again in late 2020. Many 'experts have been telling us we are approaching a min-ice-age as our sun has entered a very quiet period known as the solar minimum but all evidence suggests the planet just keeps on warming, last 2019 was the 2nd warmest year on record and so far this year disturbing patterns show the Northern Hemisphere has witnessed its warmest winter ever, as the U.S. UK and Ireland, Europe and Russia all reported warm or record warmth for winter 2019/20. Across much of the United States, a warming climate has advanced the arrival of spring. TBW

The damage is done. What needs to happen is a systemic reduction of CO2 to prevent an increase of over 2 degrees beyond pre industrial. We should never have allowed levels to exceed 350 parts per million.

I'm sorry you don't understand the science of GHGs but just b/c we have stopped emitting does NOT mean we cool down. No. The impact of existing GHG in the atmosphere will take at least 10 years to feel the total heating impact. The CO2 that is already in the atmosphere is going to stay there for quite some time... unless we can figure out a way to remove it w/o creating more CO2.

where have you people been for the last 20 years where there has not been any global warming? CO2 is not pollution

CO2 is not a pollutant period. no such thing as global warming from man.

Unknown you are correct and anyone who thinks that CO2 is the cause is in denial. CO2 is not a pollutant period