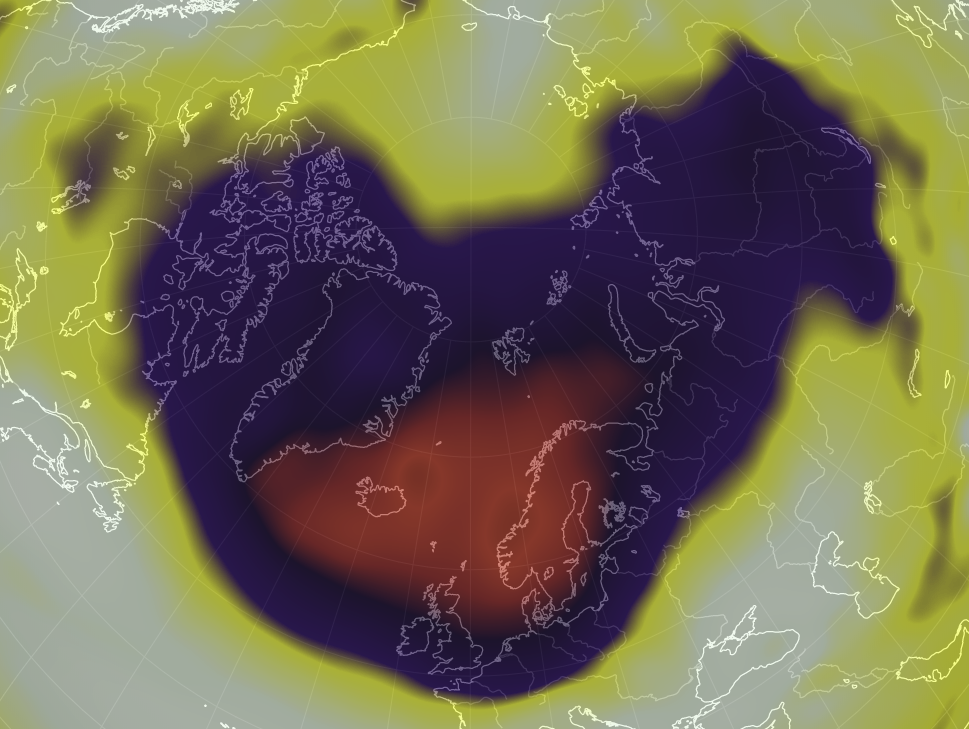 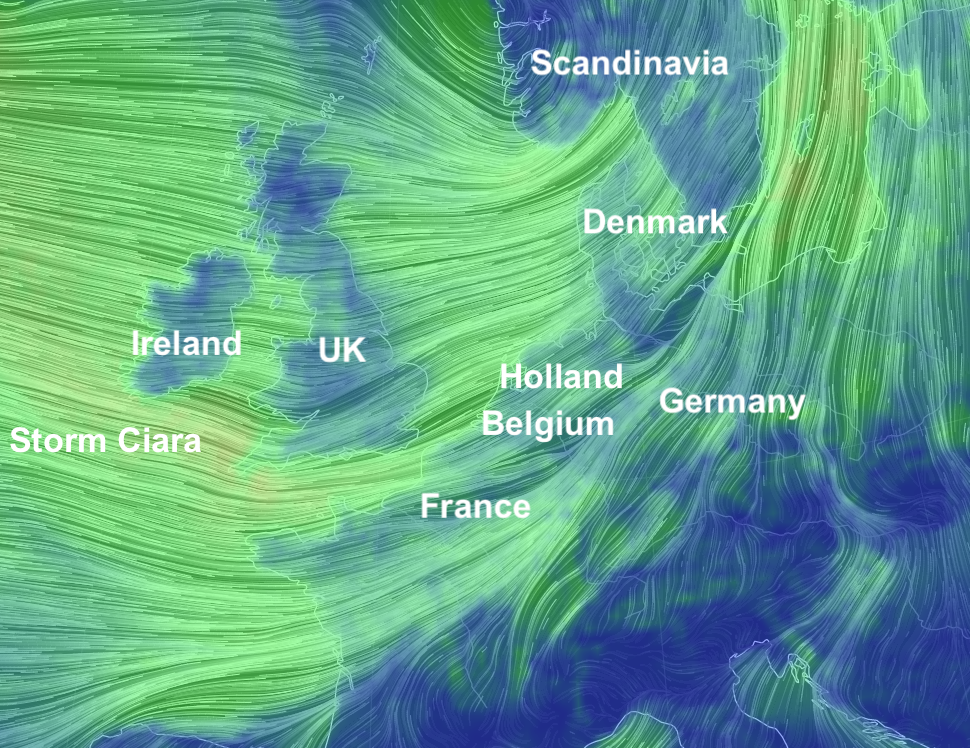 Up to 500,000 without power throughout Europe credit Earthwindmap

A storm-battered Europe with hurricane-force winds and heavy rains, killing at least seven people and causing severe travel disruptions as it moved eastward across the continent Monday and bore down on Germany. After striking Britain and Ireland on Sunday, the storm moved on, leaving a trail of damage including power cuts for tens of thousands of homes across Europe. A woman and her 15-year-old daughter died in Poland after the storm ripped off the roof of a ski rental equipment building in the mountain resort of Bukowina Tatrzanska and sent it hurtling into people standing near a ski lift, police said. Three people also were injured in the incident.

In Sweden, one man drowned after the boat he and another person were sailing in on the southern lake of Fegen capsized. The victim has washed ashore but later died. The other person is still missing, according to the Aftonbladet daily. Two men, one in the north of Slovenia and another in southern England, also died after their cars were hit by falling trees. And in Germany, a driver died after crashing his truck into a trailer parked by workers clearing storm debris off a highway in the southern state of Hesse. Police in the Czech Republic said the storm likely was to blame for a car accident that killed the man driving and injured a woman passenger. Investigators think a tree fell on the car, which skidded off the road and overturned. The number of Czech households without electricity reached 290,000, according to power company CEZ.

Britain, which bore the brunt of the storm on Sunday, was assessing the damage and working to get power restored to 20,000 homes. However, for parts of northern England and Scotland, the respite is set to be brief, with forecasts of blizzards and snow. Many parts of the country were mopping up after a month and a half's rain fell in just 24 hours in some places and rivers burst their banks. Though 360 flood warnings have been removed as the storm moves on, around 75 remain in place across the country. The River Irwell burst its banks in northwest England, prompting authorities to evacuate residents. And in the Scottish town of Hawick, which borders England, a guest house and bistro collapsed into the raging River Teviot.

The British government said it was offering financial compensation through its emergency Bellwin scheme. Under the scheme, local authorities dealing with the storm can apply to have certain costs reimbursed. Transport authorities were also working hard to clear up the mess. Network Rail, which runs the country's rail infrastructure, said thousands of engineers had "battled horrendous conditions" after the storm blew trees, sheds, roofs and even trampolines onto the tracks.

Ferries were operating across the English Channel after being closed down on Sunday, though P and O Ferries said in a tweet that further disruptions were possible. Airlines operating to and from U.K. airports were still being affected by the storm, with more than 100 flights cancelled.

The storm had largely passed through France by midday yesterday, though meteorologists warned that the Mediterranean island of Corsica could later see winds as high as 200 kph (124 mph). Up to 130,000 homes stretching from Brittany, in western France, through Normandy and the northern regions were without power Monday morning.

In Germany, utility companies were also scrambling to restore power to some 50,000 homes in northern Bavaria, where a top wind of over 160 kph (100 mph) was recorded. The storm resulted in a record amount of electricity being fed into the German grid from wind turbines, equivalent to almost 44 nuclear power plants. Train travel across Europe's biggest economy was also severely disrupted, leaving many commuters unable to get to work. The storm, which was dubbed Sabine in Germany, also led to school closures in several cities and regions, including North Rhine-Westphalia state, where several people were injured by falling branches and toppling trees.