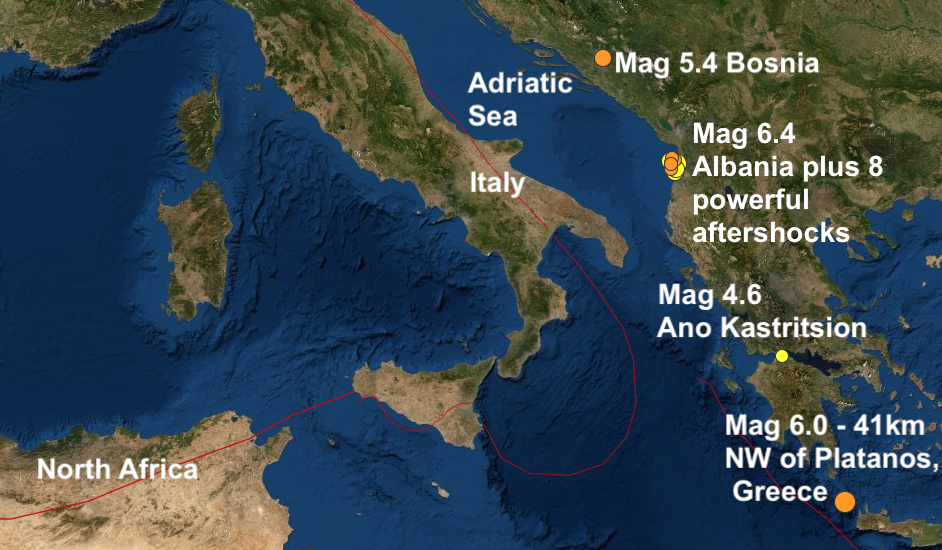 A magnitude 6.1 quake, reduced to a magnitude 6.0 by USGS, 41km NW of Platanos, Greece is the second major quake to strike the Adriatic region in two days. Yesterday a rare powerful, shallow magnitude 6.4 has rocked Mamurras, Albania which has killed 24 people and injured 650. Hundreds of people spent the night in tents and automobiles as powerful aftershocks continued to rock the area. The quake was the biggest to hit Albania in decades.

According to Keep Talking Greek the earthquake measuring 6.1 struck in the sea area between the islands of Crete and Kythera at 9:23 a.m. on Wednesday. There is no tsunami risk, say Greek seismologists. The tremor was so powerful that it was felt also in half of Greece, including the far-away mainland.

Yesterday a mag 4.6 shook Ano Kastritsion, Greece in an area where on Monday two people were killed after their moored sailing boat sank in Antirio town, western Greece, amid severe weather. Storm Gyrionis created havoc in towns across the country over the weekend. In Kineta, south of Athens, the Fire Service evacuated dozens of people from flooded homes.