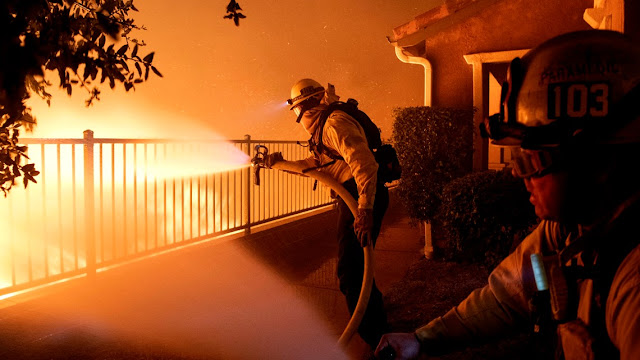 A wildfire raged out of control along the northern edge of Los Angeles Friday, prompting authorities to order tens of thousands of people from their homes as firefighters battled flames from the air and on the ground. Police Chief Michel Moore said about 100,000 people in over 20,000 homes were ordered to evacuate. Two recreational facilities are reportedly already filled to capacity. The Los Angeles Fire Department said Friday that the Saddle Ridge Fire had grown to more than 7,500 acres and was 13% contained. Approximately 4,700 acres have been consumed by the flames, leading to at least 31 structures being destroyed. One person died from cardiac arrest. A firefighter also suffered a minor eye injury. Death was confirmed at an earlier wildfire east of Los Angeles.

The Los Angeles blaze erupted around 9 p.m. Thursday along the northern tier of the San Fernando Valley as powerful Santa Ana winds swept through Southern California. Smoke streamed across the city and out to sea. Los Angeles Fire Department Chief Ralph Terrazas said there were sustained winds of 20-25 mph with gusts over 50 mph and relative humidity levels had fallen as low as 3%. "As you can imagine the embers from the wind have been travelling a significant distance which causes another fire to start," Terrazas said.

The fire erupted in Sylmar, the northernmost portion of the valley, and spread westward at a rate of 800 acres an hour into Granada Hills and Porter Ranch, where subdivisions crowd against the foothills of the Santa Susana Mountains. In response to the fires, California Governor Gavin Newsom announced that the Federal Emergency Management Agency would be offering fire management assistance to help combat the Saddle Ridge Fire. According to a press release, "the grant also enables local, state and tribal agencies to recover eligible costs." It's unclear what caused the fire. Porter Ranch, an upper-middle-class suburb that was the backdrop for the 1982 movie "E.T." is no stranger to evacuations. Four years ago, a blowout at an underground natural gas well operated by Southern California Gas Co. in the neighboring Aliso Canyon storage facility drove 8,000 families from their homes.

Southern California Edison turned off electricity to about 20,000 people in Los Angeles, Ventura, San Bernardino and Kern counties but warned that thousands more could lose service as the Santa Ana winds gained strength. In Northern California, the lights were back on Friday for more than half of the 2 million residents who lost electricity after Pacific Gas and Electric switched it off on Wednesday to prevent its equipment from sparking wildfires during dry, windy weather.