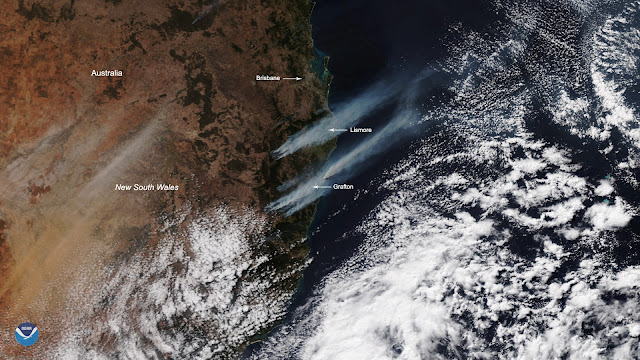 Thousands of Indonesians prayed for rain in haze-hit towns on the islands of Sumatra and Borneo on Wednesday, as forest fires raged at the height of the dry season, the state Antara news agency reported. According to Reuters, said 5,062 fire “hot spots” had been detected in six Indonesian provinces, as of Wednesday morning.

Meanwhile, hundreds of firefighters across New South Wales and Queensland, Australia are battling more than 140 bushfires that have broken out near the eastern coast. Officials in Queensland say the intense flames mark the worst start to the fire season on record for the state. At least eight of the fires appear suspicious and their causes are being investigated, said Queensland Police Commissioner, Katrina Carroll. Additionally, the hot, dry conditions, as well as strong winds, are fanning the flames and burning thousands of acres of land. Conditions like these are unusual this early in the season and are likely the result of the region’s record winter warmth and below-average rainfall.

Meanwhile, The Walker Fire burning in Plumas National Forest grew slightly overnight, but fire containment lines held as Tuesday’s weather forecast predicts some relief from “critical” fire conditions. The wildfire is mapped at 47,340 acres and is 12 per cent contained, the U.S. Forest Service said in a 6 a.m. incident update Tuesday, up from 44,307 acres and 10 per cent containment reported Monday evening. The blaze is burning timber and brush in the Genesee Valley, about 11 miles east of Taylorsville. It is by far the largest wildfire to burn in California this year, according to Cal Fire records, see the video below.