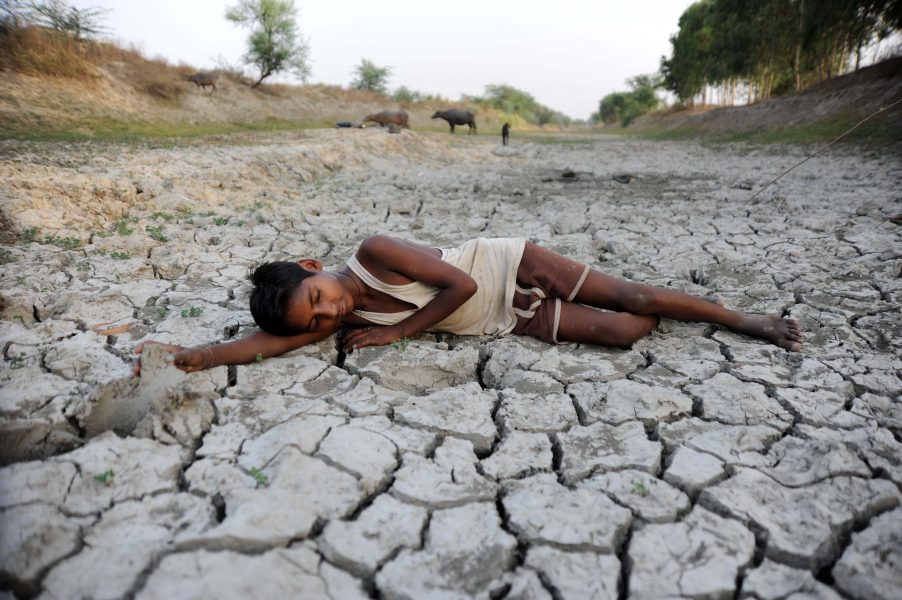 
Hundreds of Indian villages have been evacuated as historic drought forces families to abandon their homes in search of water.
The country has seen extremely high temperatures in recent weeks.
On Monday the capital, Delhi, saw its highest ever June temperature of 48C.
In Rajasthan, the city of Churu recently experienced highs of 50.8C, making it the hottest place on the planet.
Further south, less than 250 miles from the country's commercial capital, Mumbai, village after village lies deserted.
Estimates suggest up to 90% of the area's population has fled, leaving the sick and elderly to fend for themselves in the face of a water crisis that shows no sign of abating.
The village of Hatkarwadi, about 20 miles from Beed in Maharashtra state, is almost completely deserted.
Wells and handpumps have run dry in the 45C heatwave.
The drought, which officials say is worse than the 1972 famine that affected 25 million people across the state, began early in December.
By the end of May, Hatkarwadi had been deserted with only 10-15 families remaining out of a population of more than 2,000.
With 80% of districts in neighbouring Karnataka and 72% in Maharashtra hit by drought and crop failure, the 8 million farmers in these two states are struggling to survive.
More than 6,000 tankers supply water to villages and hamlets in Maharashtra daily, as conflict brews between the two states over common water resources.
The acute water shortage has devastated villagers' agriculture-based livelihood.
Crops have withered and died, leaving livestock starving and with little to drink.
Major crops, including maize, soya, cotton, sweet lime, pulses, and groundnuts - drivers of the local economy - have suffered.
Around the world, stronger El Nino weather patterns and the ongoing climate breakdown are bringing harsher and more frequent droughts - and already-dry India has been particularly hard hit.
Scientists predict that as temperatures continue to rise with global heating and populations grow, the region will experience harsher water shortages - and will need to find clever solutions to ensure there is enough water for all.
In Marathwada, by many estimates, the Indian region most affected by drought, increasingly frequent droughts have led to more than 4,700 farmer suicides in the last five years, including 947 last year. That crisis has deepened.
In the city of Beed, clean drinking water has run out and households do not have enough water to wash clothes, clean dishes or flush the toilet.
Hospitals are filling up with people suffering from dehydration - and gastrointestinal disease from drinking contaminated water.
Residents who can afford it pay private water tankers the equivalent of L3 for 1,000 litres of water. Many end up in hospital as a result - even cows refuse to drink the muddy and salty liquid that has been dredged from the bottom of exhausted dams and lakes in the region.
"Over the last one-and-half months, there has been a 50% rise in the number of patients suffering from diarrhoea, gastritis, etc," said Sandeep Deshmukh, a doctor at the Beed Civil hospital.
He blamed contamination for the rise in water-borne diseases.
"We have appealed to the people to boil drinking water," Deshmukh said.
For many of the district's population of 2.2 million, of which 240,000 live in Beed itself, their day starts by searching for water from borewells.
Others have to plead with their neighbours for water.
Usha Jadhav who lives in nearby Shivajinagar said her family does not use the toilet any more as it has become an unaffordable luxury, and that women wait for the darkness of night to defecate in the open.
"We cannot use 5-10 litres of water for flushing as we have to purchase water," she said.
By the end of May, 43% of India was experiencing drought, with failed monsoon rains seen as the primary reason.
The country has seen widespread drought every year since 2015, with the exception of 2017.
About 20,000 villages in the state of Maharashtra are grappling with a severe drinking water crisis, with no water left in 35 major dams.
In 1,000 smaller dams, water levels are below 8%.
The rivers that feed the dams have been transformed into barren, cracked earth.
Groundwater, the source of 40% of India's water needs, is depleting at an unsustainable rate, Niti Aayog, a governmental think tank, said in a 2018 report.
Twenty-one Indian cities - including Delhi, Bengaluru, Chennai, and Hyderabad - are expected to run out of groundwater by 2020, and 40% of India's population will have no access to drinking water by 2030, the report said.
This year's south-west monsoon, responsible for 80% of the country's rainfall, is projected to be delayed and smaller than normal, meaning there is no respite in sight for the parched state of Maharashtra.