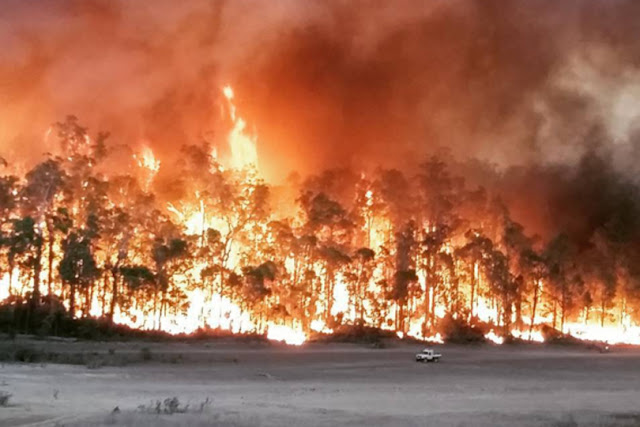 Spare a thought for the Aussies just a week after a monster dust storm measuring 500 kilometres (310 miles) blanketed Australia's southeast after suffering one of the worst droughts in living memory, one month's rain fell yesterday in a couple of hours that drenched Sydney causing severe flooding but missed the drought area, Australia's Bureau of Meteorology said it was the region's wettest November day since 1984.
"The intensity of yesterdays rainfall was phenomenal - 91mm fell in 90 minutes," forecaster Rob Taggart told the Australian Broadcasting Corporation.
The storm centred on coastal parts of New South Wales (NSW) but was reported to have missed many inland regions affected by drought.
Meanwhile, the Queensland Guardian claims Mandatory evacuations of thousands of residents of Gracemere in Queensland were underway on Thursday evening as a wildfire approached homes in catastrophic fire conditions.
Despite the extreme danger, some residents were refusing to leave and businesses were still trading in the central Queensland community.
Further south, a massive bushfire that has destroyed homes and sent 1,500 people fleeing continued to rage in Queensland’s Deepwater region, though most people had managed to escape.
For the third straight year, extreme heat in Australia is causing bats to fall out of trees dead in alarming numbers.
According to The Cairns Post, temperatures higher than 40 deg C, 104+ deg F, have killed hundreds of flying foxes, who just fall to the floor dead or dying from the extreme heat.
The extreme weather has been taking a toll on the Far North’s flying foxes, who are dropping by the dozen from trees — and causing a potential public health risk.
Wildlife carers say they are struggling with the overwhelming numbers of bats becoming affected by heat stress in colonies in Cairns, Edmonton, Gordonvale, and Townsville.