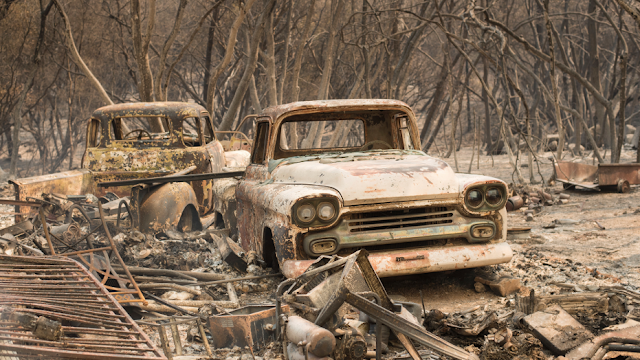 As rain spread across Northern California on Wednesday, containment of the Camp Fire in Butte County increased to 80 per cent, Cal Fire said.
The number of dead remained at 81, according to the agency's morning incident report.
The number of missing people in the area stood at 870, with 1,864 people accounted for, according to the Butte County Sheriff's Office.
Of the 81 fatalities, 56 have been tentatively identified, according to the Sheriff's Office.
The wildfire grew slightly over the past day, reaching 153,336 acres on Wednesday, according to Cal Fire, which estimates complete containment will be reached by the end of the month.
As of Tuesday evening, the deadliest and most destructive wildfire in state history had destroyed over 12,600 homes and more than 4,000 other structures, according to Cal Fire.
Many evacuation orders remain in place.
Cal Fire said established containment lines are holding.
Firefighting crews continued to rehabilitate the fire area to try to lessen the impact of the rain.
The National Weather Service predicts rain in Butte County from Wednesday potentially lasting through Saturday, which it warned could cause flash floods and debris flows in the fire zone.
Caltrans announced Tuesday that the Pacific Coast Highway had been reopened to traffic in both directions, but parts of State Routes 70 and 191 were closed.