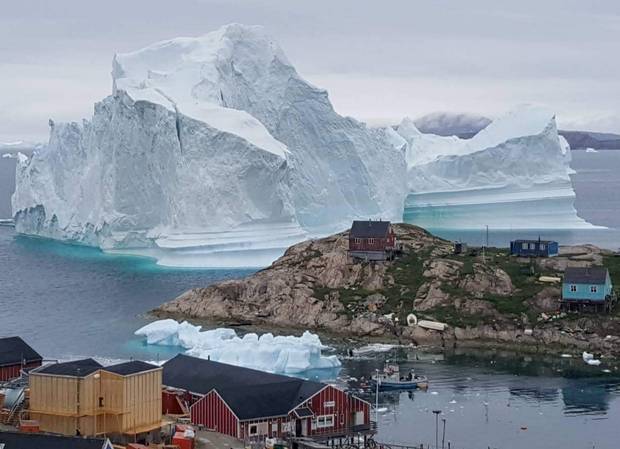 An iceberg six kilometres wide and drifting off Greenland has triggered fears of flooding as it breaks up, leading authorities to evacuate a high-risk zone.
The authorities have urged residents of the Innaarsuit island settlement with houses on a promontory to move away from the shore over fears that the 100-metre high iceberg, which was spotted on Thursday, could swamp the area.
"We fear the iceberg could calve and send a flood towards the village," Lina Davidsen, a security chief at the Greenland police, told Danish news agency Ritzau on Friday.
The settlement in northwestern Greenland has 169 inhabitants, but only those living closest to the iceberg have been evacuated, Ritzau reported.
"The iceberg is still near the village and the police are now discussing what do to next," Kunuk Frederiksen, a police chief in the Danish autonomous territory, told AFP.
Susanne K. Eliassen, a member of the village council, told the local newspaper Sermitsiaq that it was not unusual for large icebergs to be seen close to Innaarsuit.
"But this iceberg is the biggest we have seen... and there are cracks and holes that make us fear it can calve anytime," she said, adding that the village's power station and fuel tanks are close to the shore. "Nobody is staying unnecessarily close to the beach and all children have been told to stay in areas that are high up," Eliassen added.
The incident comes weeks after scientists at New York University shot and released a video of a massive iceberg breaking free from a glacier in eastern Greenland in June.
The enormous iceberg broke off a glacier in eastern Greenland, with scientists capturing the dramatic event on video, see here.
New York University professor David Holland, an expert in atmospheric and ocean science, said it was "the largest event we've seen in over a decade in Greenland."
A June 22 video of the incident was taken by his wife, Denise Holland of NYU's Environmental Fluid Dynamics Laboratory.
They had camped by the Helheim Glacier for weeks to collect data to better project sea level changes due to global warming.
Holland said Wednesday that the time-lapse video, which is speeded up 20 times, shows "3 percent of the annual ice loss of Greenland occur in 30 minutes."
"It sounded like rockets going off," he said, describing it as "a very complex, chaotic, noisy event." While the couple is studying Greenland, he said that "the real concern is in Antarctica, where everything is so big the stakes are much higher."
In northwestern Greenland, another large iceberg was apparently grounded on the sea floor near the small village of Innaarsuit, which has a population of 169.
"Its residents were evacuated in the early hours of Friday in fears that a flood would hit the place as a result of the broken iceberg," Greenland police spokeswoman Lina Davidsen told Danish broadcaster TV2.
"All the people in the danger area have been evacuated to a building that is further up in the village," Davidsen said.
"The evacuation happened only because the iceberg is so close to the village."
Innaarsuit is located about 1,000 kilometers (620 miles) north of Nuuk, Greenland's capital and largest city.