FLAMING June 2018 was 5th warmest on record for the globe: Record heat felt across the continents as the Northern Hemisphere baked 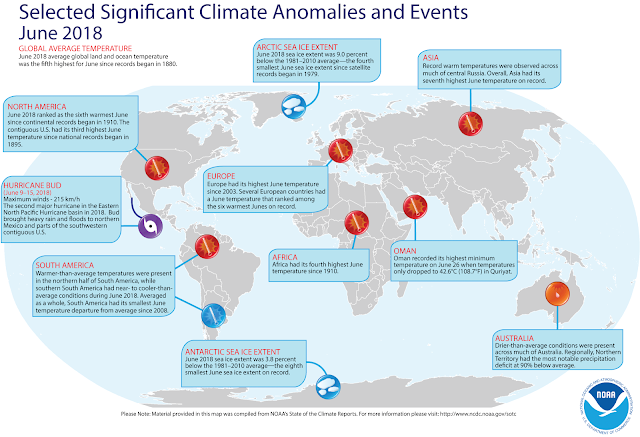 CLICK ON IMAGE TO READ. An annotated map of the world showing notable climate events that occurred in June 2018. (NOAA NCEI)
June for many in the Northern Hemisphere was the beginning of a heatwave unprecedented for nearly 50 years.
As summer hit the Northern Hemisphere heatwaves were being reported from Canada, the U.S. the UK, Europe and Asia as the northern half of the planet baked.
In parts of south-west France, temperatures hit 40 deg C (104 deg F).
In Canada residents in the Toronto area had to endure a humidex temp which pushed into the mid-40s deg C (113 deg F).
Meanwhile, a dangerous, oppressive heat wave scorched central, and the eastern US.
Temperatures reached at least 30 Celsius in England, Scotland, Wales and Northern Ireland and the heatwave is still in progress in the UK.
Here in western and northern Europe, we are still basking in glorious sunshine with very hot temperatures and no let up as the heatwave which began in June is still at large, in my town of Alkmaar in North Holland we haven't seen rain for 60 days.

According to NOAA, June 2018 was 5th warmest on record for the globe

The persistent drumbeat of warm temperatures around the world last month made for the fifth warmest June on record and the first half of the year the fourth warmest for the planet.

Climate by the numbers
June 2018
The average global temperature in June was 1.35 degrees F above the 20th-century average of 59.9 degrees. This was the fifth highest for June in the 139-year record (1880–2018). Last month was also the 42nd consecutive June and the 402nd consecutive month with temperatures above average.

The year to date I January through June 2018
The year-to-date average global temperature was 1.39 degrees F above the average of 56.3 degrees. This is 0.52 degree lower than the record high set in 2016 for the same YTD period.