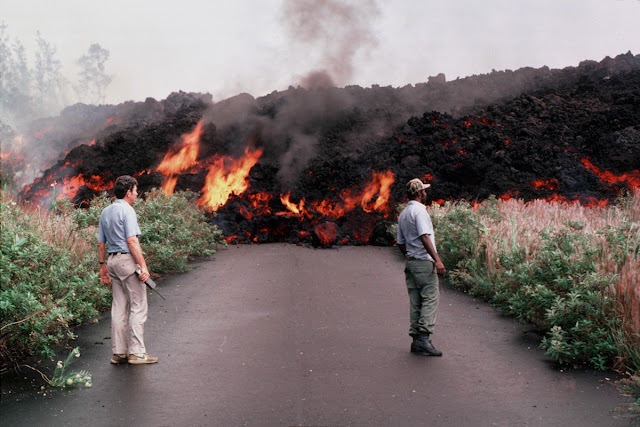 Photo credit hawaiimagazine.com
Hawaii's Kilauea volcano spewed ash nearly six miles (9 km) into the sky on Thursday and scientists warned this could be the first in a string of more violent explosive eruptions with the next possibly occurring within hours.
"This has relieved pressure temporarily," U.S. Geological Survey geologist Michelle Coombs told a news conference in Hilo.
"We may have additional larger, powerful events."
Residents of the Big Island were warned to take shelter from the ash as toxic gas levels spiked in a small southeast area where lava has burst from the ground during the two-week eruption.
The wind could carry Kilauea's ash plume as far as Hilo, the Big Island's largest city and a major tourism centre, the County of Hawaii Civil Defense warned in an alert.
"Protect yourself from ash fallout," it said.
Some Big Island residents had feared "the big one" after Kilauea shot anvil-sized "ballistic blocks" into the visitors' car park on Wednesday and was rocked by earthquakes that damaged buildings and cracked roads in the park that was closed last week.
"The activity is such that they can occur at any time, separated by a number of hours," Hawaiian National Volcano Observatory Deputy Scientist-In-Charge Steve Brantley told reporters on a conference call.
Geologists said it was extremely unlikely Kilauea would have a massive eruption like that of 1790 which killed dozens of people in the deadliest eruption to occur in what is now the United States.