Photo NOAA
It's just over a week since the end of a remarkable 2017 Atlantic hurricane season, which officially ended on November the 30th.
It was the hurricane season that wouldn’t quit, it was in the top ten's most active season in the historical record dating to 1851 and was the most active season since the crazy year of 2005.
Many Carribean islands have been destroyed forever.
All ten of the season's hurricanes occurred in a row, the greatest number of consecutive hurricanes in the satellite era. 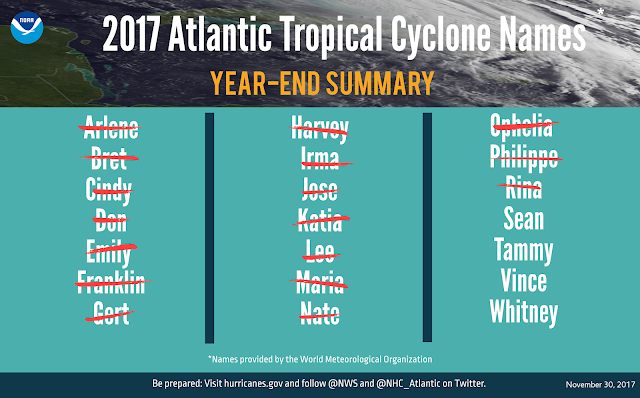 NOAA
In addition, it was by far the costliest season on record, with a preliminary total of over $401.89 billion (USD) in damages, which is nearly three times the cost of 2005’s total, and essentially all of which was due to three of the season's major hurricanes — Harvey, Irma, and Maria.
This season is also one of only six years on record to feature multiple Category 5 hurricanes, and only the second to feature two hurricanes making landfall at that intensity.
This season is the only season on record in which three hurricanes each had an ACE of over 40: Irma, Jose, and Maria.

The season produced 17 named storms of which 10 became hurricanes including six major hurricanes (Category 3, 4 or 5) – including the first two major hurricanes to hit the continental U.S. in 12 years.
It was a particularly devastating season, according to NOAA 2017 was the fifth most active season in the historical record dating to 1851 and was the most active season since 2005.
This year, three devastating major hurricanes made landfall (Harvey in Texas; Irma in the Caribbean and southeastern U.S.; and Maria in the Caribbean and Puerto Rico).
Harvey was also the first major hurricane to hit the U.S. since Wilma struck Florida in October 2005. Additionally, four other storms hit the U.S., including Cindy in Texas, Emily and Phillipe in Florida, and Nate in Mississippi.
“The season started early with a storm in April and the peak of the season featured an onslaught of ten successive hurricanes.