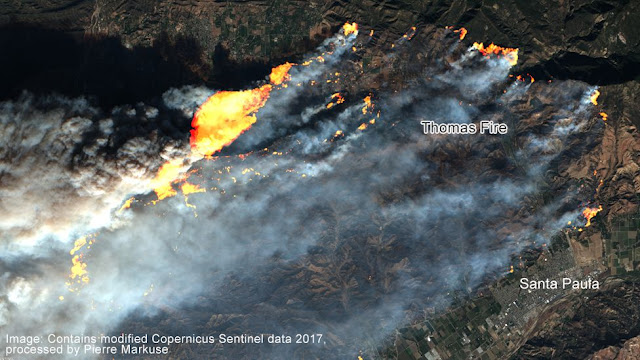 LOS ANGELES — Red flag warnings signifying a high danger of wildfires stemming from strong, gusty winds and very low humidity will be in force in much of the Southland for a fifth straight day today and have been extended once again — this time until at least 8 p.m. Sunday.
The red flag warnings will be in effect until 8 p.m. Sunday in the San Gabriel and Santa Monica mountains, the Angeles National Forest; the San Fernando, Santa Clarita and San Gabriel valleys; L.A. County beach cities, metropolitan Los Angeles, Downtown L.A., the Hollywood Hills and all of Orange County.
Red flag warnings are also in effect in Ventura, Santa Barbara, San Diego, Riverside and San Bernardino counties.
Wind gusts of between 40 and 60 miles per hour are expected today, along with humidity levels of between 6 and 10 percent, National Weather Service forecasters said according to LA Daily News.
California's newest wildfire tore through retirement communities built on golf courses and killed elite thoroughbred horses in its first destructive day.
The new blaze, in San Diego County, means a huge swath of Southern California is now in flames. December's shockingly dry, hot and windy conditions brought on unprecedented fire danger.
North of San Diego, another blaze called the Lilac Fire swelled from 10 acres to 4,100 acres (1,659 hectares) in just a few hours on Thursday, CAL FIRE said, prompting Governor Jerry Brown to declare a state of emergency for San Diego County.
The San Diego-area fire quickly grew to more than 6 square miles and burned dozens of homes at Rancho Monserate Country Club.
Flames engulfed a horse training centre, prompting trainers to unlock stables and encourage hundreds of racehorses to run for their lives.
It's not clear how many died.
The destructive blaze broke out as firefighters tried to corral the largest fire in the state, which was burning around Ventura 130 miles to the north.
It destroyed at least 439 buildings as it grew to 180 square miles since Monday.
Fire crews also fought large fires around Los Angeles.
The Ventura and L.A.-area fires put tens of thousands of people under evacuation orders.
According to CalFire, as of very late Thursday night, six large fires had burned 220 square miles, 190,000 residents were evacuated, 23,000 homes were threatened, 500 were confirmed destroyed and there were 5,700 firefighters on the lines.
A woman was found dead in a wrecked car in an evacuation zone near the city of Santa Paula, where the Ventura County blaze began Monday night, but officials couldn't immediately say whether the accident was fire-related.
Authorities reporting on the six major wildfires said the number of structures destroyed or damaged had raced past the 500 mark early Friday, with 439 destroyed and 85 damaged in the Thomas fire alone.
California Governor Jerry Brown asked President Trump to declare a state of emergency for Southern California to aid state and local efforts to fight the historic wildfires burning in the region, Brown's office said late Thursday.
The request follows emergency proclamations by Brown for San Diego, Los Angeles and Ventura counties.