It's always fatal if untreated: Plague outbreak in Madagascar has the rich panicking as the desease hits the cities: A billion traveling by air per year 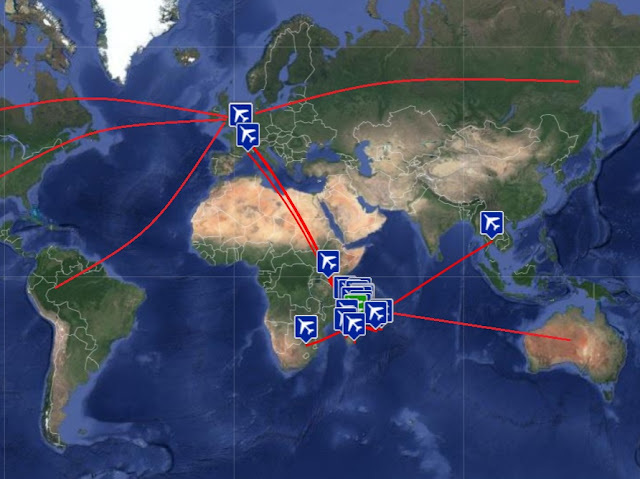 RSOE Alertmap
A plague outbreak in Madagascar has killed at least 74 people and 805 cases have been reported so far.
The government has deployed resources to curb the disease, but many obstacles remain.
As plague cases rose last week in Madagascar's capital, many city dwellers panicked.
They waited in long lines for antimicrobials at pharmacies and reached through bus windows to buy masks from street vendors.
Schools have been cancelled, and public gatherings are banned.
For the 1st time, the disease long seen in the country's remote areas is largely concentrated in its 2 largest cities, Antananarivo and Toamasina.
Global health officials have responded quickly.
The WHO, criticized for its slow response to the 2014 Ebola epidemic in West Africa, has released USD 1.5 million and sent plague specialists and epidemiologists.
The Red Cross is sending its 1st-ever plague treatment centre to Madagascar.
Madagascar's minister of public health rallied doctors and paramedics in a packed auditorium at the country's main hospital, saying they're not allowed to go on vacation.
"Let's be strong because it's only us.
We're at the front, like the military," Mamy Lalatiana Andriamanarivo said.
The outbreak could continue until the end of infection season in April [2018], experts warn. Madagascar has about 400 plague cases per year, or more than half of the world's total, according to a 2016 WHO report.
Usually, they are cases of bubonic plague in the rural highlands.
Bubonic plague is carried by rats and spread to humans through flea bites.
It is fatal about the half the time, if untreated.
Most of the cases in the current outbreak are the pneumonic plague, a more virulent form that spreads through coughing, sneezing, or spitting and is almost always fatal if untreated.
In some cases, it can kill within 24 hours.
Like the bubonic form, it can be treated with common antimicrobials if caught in time.
The WHO calls plague a "disease of poverty" caused in part by unsanitary living conditions. Madagascar has a per capita GDP of about USD 400, and national programs to control the disease have been "hampered by operational and management difficulties", according to a report by the European Centre for Disease Prevention and Control.
But the airborne pneumonic plague, which accounts for about 75 percent of cases in the current outbreak, makes no class distinctions.
"Normally, the people who catch the plague are dirty people who live in poor areas, but in this case, we find the well-to-do, the directors, the professors, people in every place in society, catching the disease," said Dr Manitra Rakotoarivony, Madagascar's director of health promotion.
The current outbreak began in August 2017, earlier than usual, when a 31-year-old man who had spent time in a village in the central highlands, Ankazobe [Analamanga region], travelled by bush taxi to the east coast, unaware that he had the plague.
He died en route and was buried without any safety precautions in Toamasina.
4 people in contact with him also died.
Residents of the capital began to relax in recent days amid the global response to the outbreak, but the disease remains a serious threat with the number of new cases per day remaining steady.
Madagascar has fought the disease for more than a century.
It was introduced to the island in 1898 when steamships from India brought rats infected with the bacteria that cause the disease.
The plague nearly disappeared from Madagascar for 60 years, starting in 1930, but re-emerged in recent decades.
While the WHO says the risk of the epidemic spreading beyond the region is very low and does not advise restrictions on travel to Madagascar.

The impact of air travel on the spread of infectious diseases has led to considerable concern but limited study.
More than 1 billion people travel by air each year.
There are several important ways in which air travel can influence the global spread of emerging and established infectious disease.
Infections may be spread on the aircraft through close contact and large droplets; airborne spread through small-particle aerosols, as in the case of a severe acute respiratory syndrome (SARS); or even through contaminated food.
Aircraft can transport infected disease vectors, such as rats or malaria-infected mosquitoes, as nonpaying passengers.
Perhaps the greatest concern for global health, however, is the ability of a person with a contagious illness to travel to virtually any part of the world within 24 h.