Hundreds of thousands of fish, crabs, shrimp and other species are washing up dead on India's west coast leaving experts baffled 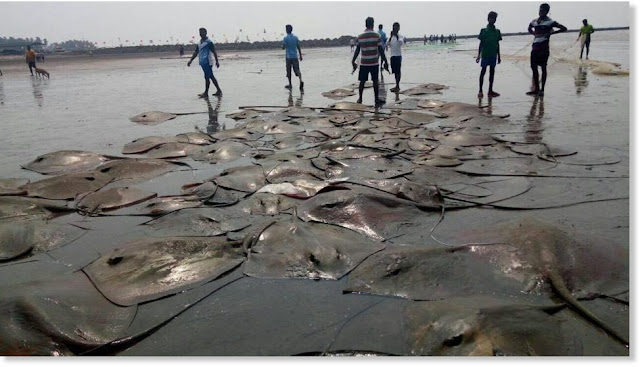 Photo sott.net
Fish and other marine life have been washing up on the country's west coast for the past three days, leaving marine biologists baffled.
Reef Watch Marine Conservation, a nature conservancy group, said they have reports of fish, crabs and shrimp getting stranded on the coast near Alibaug in Maharashtra, Karwar in Karnataka and Varkala in Kerala between Saturday and Tuesday.
The group said it received images and videos from volunteers that indicate the cause of the marine deaths could be similar.
"There are two possible reasons we are looking at - low oxygen zones at sea pushing these organisms close to the shore or severe toxicity in the water.
However, only a detailed study can reveal the exact cause," said Nayantara Jain, executive director, Reef Watch Marine Conservation.
The Maharashtra Maritime Board said the deaths were a matter of concern.
"We have never seen hundreds of thousands of fish washing ashore at different beaches along the entire west coast," said Atul Patne, chief executive officer, MMB
After collecting samples from the dead marine organisms that have washed up along India's west coast, marine biologists have ruled out pollution as the cause of the deaths.
"The changing weather patterns, changes in temperature and several other hydrological factors leads to such incidents.
However, we are certain that there is nothing to worry about and no alerts have been issued by us," said an official from the Central Marine Fisheries Research Institute (CMFRI).
"A report will be published by us by the end of this week, and it will be submitted to the district collector and the state government."
Officials from the state mangrove cell that has setup marine rescue centres along the Maharashtra coast said that pollution can be ruled out since incidents have been reported all along the western coast and it is not confined to an algal bloom, which is a localised pollution problem.
Nutrients in pollutants can trigger algal blooms which can lead to depletion of oxygen in the water, leading to the death of marine organisms.
N Vasudevan, additional principal chief conservator of forest, state mangrove cell, said that the incidents could have been caused due to a combination of factors like rains and changes in water temperature.
"Once the monsoon starts retreating, the lowermost layer of the water comes up carrying nutrients. The process is also associated with shifts in temperatures between the surface and deep waters," he said.
"Upwelling also leads to the formation of low oxygen zones, and this forces fish and other marine life to move closer to shallow waters.
Wave action close to the shoreline further pushes these species to the beach where they get stranded." Some experts, however, did not rule out pollution.
"Previous evidence of so many species washing ashore has been because of low oxygen in the water due to algal blooms caused by severe water pollution.
This can be the probable cause for this as well.
It has to be observed whether there is a change in the colour of the water to establish this," said E Vivekanandan, consultant and senior scientist, CMFRI.
"Pollution cannot be ruled out and it could be a major factor in these areas (Alibaug, Karwar and Varkala) are all located close to offshore oilfields, and also are a major route for movement of ships," said Dr Baban Ingole, chief scientist, National Institute of Oceanography.
Vasudevan added that CMFRI has been instructed to study the gills of the marine mammals to check for pollution and the cell will take further action based on their report.