"Their Sky Has Changed!" Inuit elders sharing information with NASA as Canadian Alaskan and Russian permafrost is thawing at an alarming rate 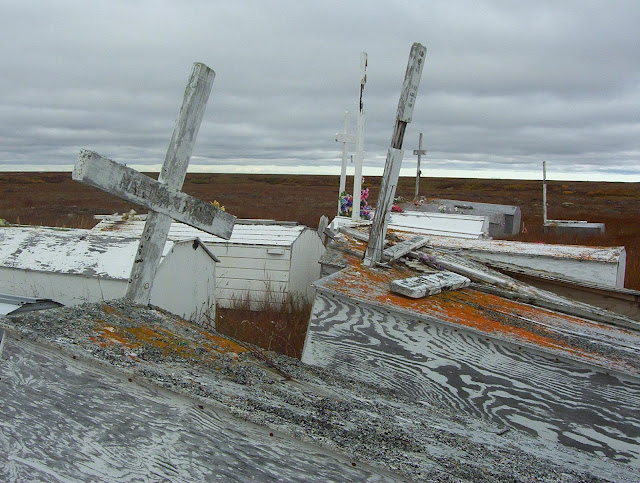 Photo ktoo.org
Climate change is thawing the Yukon-Kuskokwim Delta's permafrost, and it's doing more than cracking foundations, sinking roads and accelerating erosion.
In villages like Kong, communities have stopped burying their dead because, as the permafrost melts, the oldest part of their cemetery is sinking.
Digging graves in the soggy ground were just making it worse.
Tribal Administrator Roland Andrew guided me through the cemetery.
The white crosses stick out of the sunken ground at odd angles, some of them almost completely submerged in the brackish water.
"After we dug down 6 feet, it created a lake around it," Andrew said.
The swamp appeared about 10 or 15 years ago and then expanded, swallowing the graves around it. The graveyard in the neighbouring village of Kwigillingok, or Kwig, is also sinking into swampland. After consulting with Kwig's elders for advice, Andrew said that Kong started laying its loved ones to rest in boxes above ground.
Digging into the ground removes the plants and topsoil that insulate the permafrost and accelerates the rising water.
Andrew said that the swamp stopped expanding when Kong stopped burying its dead, but a row of white grave boxes from about a decade ago are teetering at odd angles, sliding feet-first into the lake. The water is still causing problems.
The hill that the village stands on is slowly slipping down to sea level.
"This hill used to be high," he said. "And it's still going down."
He doesn't see Kong relocating.
If anything, he said, Kong's population might double in size in the future.
Community members in Kwig are talking about moving there because of the seasonal flooding. Andrew wants to be buried next to his parents; he keeps a picture of them above his desk.
They died last year within about eight months of each other after being married for over 60 years. Their grave boxes still smell like fresh paint and are wreathed in plastic flowers, propped up on blocks on the cemetery's highest ground, at least for now.

Since the first buildings out here, people have struggled with the freeze and thaw of the soils above the permafrost.
Now those challenges are amplified. "What they are saying is the permafrost is dying," said Eric Whitney, a home inspector and energy auditor in Bethel who has noticed newly eroding river banks, slanting spruce trees and homes shifting anew just weeks after being made level.
"I'm just assuming it is not coming back while we're around here."
Engineers designing new buildings and roads battle complex forces of nature in dealing with permafrost thaw.
One big project - addressing what appear as fierce frost heaves on Chief Eddie Hoffman Highway, one of the main roads through town - is still short on answers.
In the wild, boggy lands of the Yukon-Kuskokwim Delta, a tundra blanket naturally insulates ice-rich permafrost.
But in much of Bethel and surrounding villages, that blanket is long gone.
"When you lose the tundra, you lose your insulation," said Mike Salzbrun, owner of foundation and geotechnical contractor Salzbrun Services and Drilling, with decades of experience on the Y-K Delta. Permafrost here is considered "warm," maybe a fraction of a degree below freezing, so it's sensitive to just a slight warming of the air, said Vladimir Romanovsky, geophysics professor and permafrost researcher at the University of Alaska Fairbanks.


Last year, researchers in Siberia's remote Bely Island made the bizarre discovery that the ground had started bubbling in certain places, and was squishy under the locals' feet like jelly.At the time, just 15 of these swollen bubbles had been identified, but an investigation in the wider region of the Yamal and Gydan peninsulas has revealed that 7,000 or so of them have cropped up, and the concern now is that they could explode at any moment."At first, such a bump is a bubble or 'bulgunyakh' in the local Yakut language," Alexey Titovsky, director of the Yamal Department for Science and Innovation, toldThe Siberia Times.


via GIPHY"With time, the bubble explodes, releasing gas.This is how gigantic funnels form."Those gigantic funnels Titovsky is referring to are every bit as intimidating as they sound.Now picture thousands of these death traps dotted across the landscape, with each of the 7,000 newly identified bubbles poised to explode without warning.Back in 2016, local environmental researchers Alexander Sokolov and Dorothee Ehrich decided to pull back the dirt and grass that had been blanketing these bulging bumps of earth, and found that the air escaping from them contained up to 1,000 times more methane than the surrounding air, and 25 times more carbon dioxide.And things can get even weirder at the bottom of the biggest sinkholes - a 2014 investigation into a 30-metre-wide (98-foot) crater on the Yamal Peninsula found that air near the bottom of the crater contained unusually high concentrations of methane - up to 9.6 percent.


"Their Sky Has Changed!" Inuit elders sharing information with NASA regarding Earth's "WOBBLE" 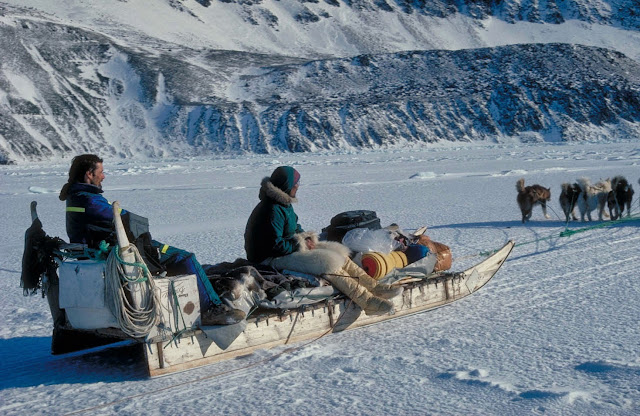 We are all obsessed with the weather here in the West and rightly so with the unusual weather we have had to endure recently, extreme has become the new norm but what about our brothers and sisters living in the Canadian Arctic circle?
Inuit knowledge and climate change were discussed by delegates at the recent global warming summit in Copenhagen and what the Eskimo elders are saying have NASA, scientists and experts alike worried...
Global warming might not be the whole story!
It seems the Inuit elders are also witnessing strange and unfathomable weather up there in the North. The elders talk about how their world has changed, how it was then and how it is now.
It is a worrying picture, a picture of melting glaciers and thinning or disappearing sea ice.
Seals with burns on their coats and covered with sores and a thinner hide, the Seal skin has deteriorated and while scientists maintain man-made pollution is contributing to climate change the elders are convinced something much much bigger is going on!
Astonishingly what the elders are saying is global warming is not the whole story...
The elders maintain the Sun doesn't rise as it used to, they have longer daylight to hunt and the Sun is higher than it used to be and warms up quicker than before.
The elders who were interviewed across the north all said the same thing, their sky has changed. The stars the Sun and the Moon have all changed affecting the temperature, even affecting the way the wind blows, it is becoming increasingly hard to predict the weather, something that is a must on the Arctic.
The elders all agree they believe the Earth has shifted, wobbled or tilted to the North. Zacharias Kunuk has literally been e-mailing NASA with information from the elders regarding changes in the sky and the position of the Earth on its axis....
The elders are trying to reach out to warn the world of the effects of environmental change.
Exploring centuries of Inuit knowledge, allowing the viewer to learn about climate change first-hand from Arctic residents themselves, the film portrays Inuit as experts regarding their land and wildlife and makes it clear that climate change is a human rights issue affecting this ingenious Indigenous culture.
Hear stories about Arctic melting and how Inuit believe that human and animal intelligence is key to adaptability and survival in a warming world.