Another major quake! A mag 6.7 Bouvet Island region is the 5th major quake in four days 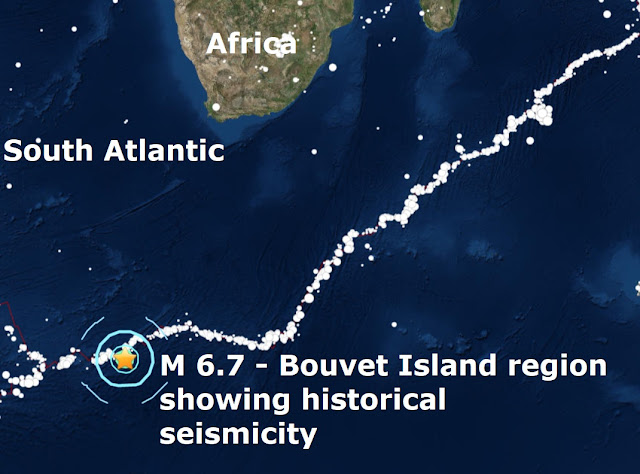 USGS
A mag 6.7 - Bouvet Island region is the 5th major quake in four days, however, this one didn't happen along the Pacific ring of fire as the other four did, this one occurred in the South Atlantic.
This morning's major quake is the 6th of October and the 81st of 2017.

It is well known now Coronal Holes and Solar activity does influence earthquakes.
Solar wind flowing from the coronal hole, see below should reach Earth today which surprisingly should reduce the threat of more major quakes in the coming days.
According to QuakeWatch.net the occurrence of geomagnetic storms (Kp>4) appears to have a depressive effect on earthquakes during the peak of the storms.
The primary risk window begins when a mid/low latitude coronal hole reaches the earth-facing 1/4th of heliographic longitudes and ends when geomagnetic storms occur, (which will happen today), or when the coronal hole leaves the Earth-facing half of the sun. 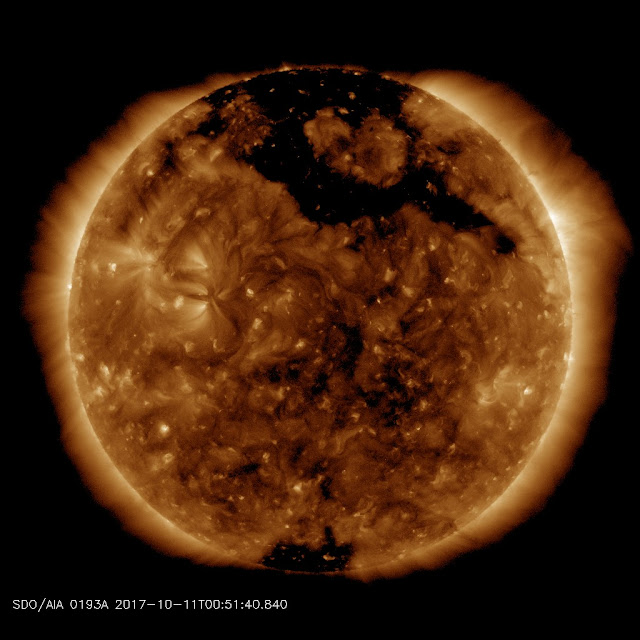 The K-index, and by extension the Planetary K-index, are used to characterize the magnitude of geomagnetic storms.
Kp is an excellent indicator of disturbances in the Earth's magnetic field and is used by SWPC to decide whether geomagnetic alerts and warnings need to be issued for users who are affected by these disturbances.
The principal users affected by geomagnetic storms are the electrical power grid, spacecraft operations, users of radio signals that reflect off of or pass through the ionosphere, and observers of the aurora.

NASA space weather and quakesThe BBC pointed out in 2008: Nasa scientists have said they could be on the verge of a breakthrough in their efforts to forecast earthquakes.Researchers say they have found a close link between electrical disturbances on the edge of our atmosphere and impending quakes on the ground below.Just such a signal was spotted in the days leading up to the recent devastating event in China.They have teamed up with experts in the UK to investigate a possible space-based early warning system.Many in the scientific community remain deeply sceptical about whether such signals are indeed indicators of an approaching earthquake.But Minoru Freund, a physicist and director for advanced aerospace materials and devices at Nasa's Ames Research Center in California, told BBC News: "I do believe that we will be able to establish a clear correlation between certain earthquakes and certain pre-earthquake signals, in an unbiased way."SourceHome
at October 11, 2017