BOOM! Departing shot: Sunspot AR2673 blasts off another monster X8-class flare and It could be back in two weeks 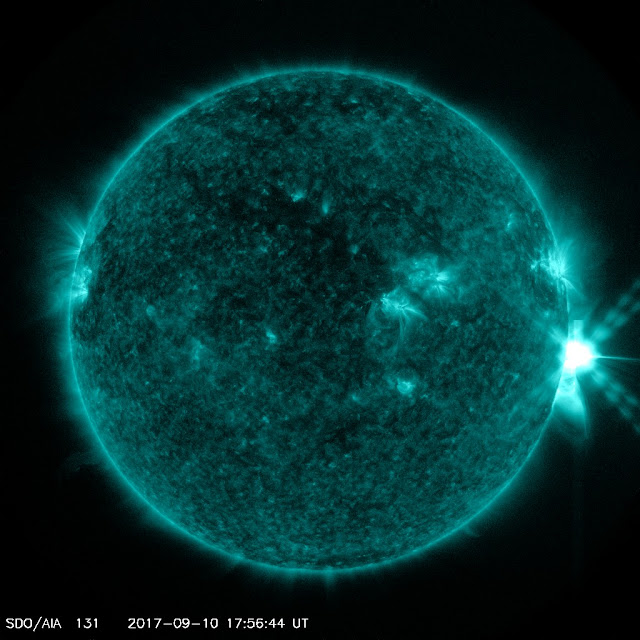 AR2673 has erupted again producing another monster X8-class flare.
It is the 5th X-class flare in the last 5 days which is astonishing and something I have never witnessed before in ten years as a blogger, see below.

Above Goes data showing last night's monster X8-class flare.
The biggest was the enormous X9.3-class solar flare on Wednesday evening, the strongest solar flare in more than a decade.
It was the equal 14th biggest flare since 1976.
The massive flare is even more extraordinary as we are now entering Solar Minimum according to NASA.
Earth's magnetic field was battered by a severe G4-class geomagnetic storm with solar winds blowing at nearly 800km/sec
The severe storm came from the monster X9-class solar flare causing wonderful auroras as far south as Kentucky.
According to Spaceweather.com, Protons accelerated toward Earth by last night's explosion are swarming around our planet now, causing a moderately strong solar radiation storm.
A pulse of ultraviolet and X-radiation from the flare ionized the top of Earth's atmosphere, triggering a shortwave radio blackout over the Americas. 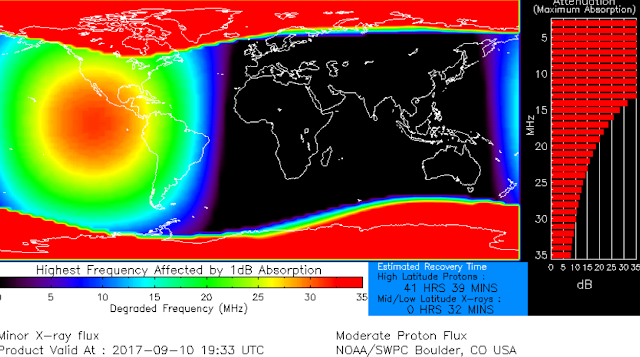 Blackout map NOAA Click on image to enlarge
Sunspot AR2673 materialized with shocking speed on Sept. 3rd. Three days later it unleashed the strongest solar flare in more than a decade with a X9.3-class eruption that hurled a CME directly at Earth. Now this memorable sunspot is about to disappear.
Later today, the sunspot will go around the bend, commencing a 2-week journey across the backside of the sun.
Will it still be as potent when it reappears 14 days from now, or will it be even stronger?
Stay tuned to The Big Wobble for the answer