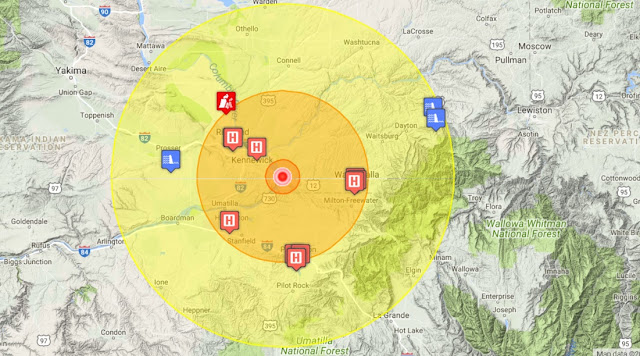 RSOE Alert map
A botulism bloom is suspected of causing the death of waterfowl and birds in the Wallula area.
Bird carcasses began appearing in wetland areas between Wallula and Burbank about a couple of weeks ago.
Since then more than 250 dead waterfowl and about 50 shorebirds have been collected, said Mark Vekasy, assistant district biologist with the Washington Department of Fish and Wildlife.
There were no obvious signs of what caused the birds' death, although many appeared to have drowned, Vekasy said.
Carcasses have been sent to the National Wildlife Health Center and necropsies have ruled out avian flu or cholera.
Tests for botulism take longer and have yet to be returned, Vekasy said Monday, "but we've been working under the assumption of botulism."
Botulism is caused by a toxin produced by a naturally-occurring bacterium and in hot weather botulism blooms can occur in wetland ponds.
Along with directly causing the death of waterfowl and other birds, maggots feeding on carcasses can concentrate the toxin and that kills more birds and waterfowl as the birds feed on the maggots.
In an effort to cut down on the bird mortality, wildlife workers have been using reflective tape and propane cannons to scare away waterfowl and birds in the area.
The U.S. Fish and Wildlife Service has been consulted and J.R. Simplot Company, which has land where some of the carcasses have been found, has been cooperating with helping with hazing efforts and collecting dead birds for disposal, Vekasy said.