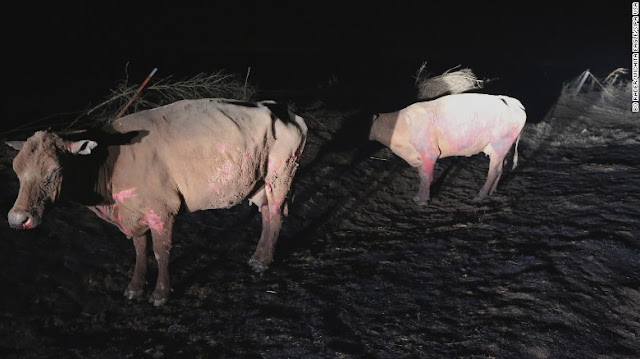 A pair of badly burned cows stand along a rural road near Ashland, Kansas, early Tuesday. Photo CNN
Ranchers are still trying to assess the damage, but loss of cattle could is in the thousands
At least seven people have died with more missing after wildfires across several states in central U.S. have consumed million’s of acres.
Wildfires have wiped out 650,000 acres in Kansas this week devastating farms in the area.
The fires are thought to have killed nearly 10,000 cattle, many of them calving (which could actually double the amount) in the Kansas alone.
The fires have been helped by low humidity and heavy winds, conditions that have made the Kansas Plains a tinderbox.
The devastation doesn’t end there, not only have the farmers lost an unknown number of cattle, but the livestock that have survived have no grass or hay to feed on, most of it having been consumed by the flames.
With more than a million acres burnt it has left the land looking like a moonscape and to make matters worse there is 100,000 miles of fencing burnt.
Reports from the Texas A&M Forest Service said the Perryton Fire located in Ochiltree and Lipscomb counties in the Texas Panhandle is an estimated 478,935 acres in size. The fire has skirted south of the city of Higgins as of 11:58 a.m. CST Tuesday.
Texas A&M Forest Service has been on the scene with ground resources working in conjunction with local resources. Two homes have been reported as destroyed.
The Dumas Complex Fire near the city of Amarillo, Texas, is 100 percent contained, leaving an estimated 29,197 acres burning as of 5:19 p.m. CST Tuesday.
Ochiltree County Sheriff Terry Bouchard said that as many as 500 animals died in fires that consumed commercial hog barns.
The Oklahoma Forestry Service said the fires burned 400,000 acres across the state. Gov. Mary Fallin declared a state of emergency for 22 counties.
According to a statement from Kansas Gov. Sam Brownback, a man died from smoke inhalation in Clark County; 350,000 acres of the county are consumed, and nearly 13,000 people had to be evacuated.
Firefighters have contained a grass fire that destroyed four homes and left about 200 head of cattle dead on the plains of northeastern Colorado.