“The scope and magnitude of the problem is overwhelming!" 102 million dead trees a nightmare for California Department of Forestry and Fire Protection 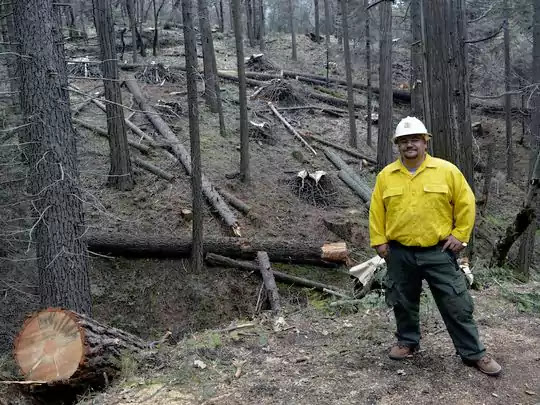 Photo Visalia Times-Delta
In 2014 it was less than 4 million, last July it had risen to 66 million it now stands at more than 100 million.
California has more than 100 million dead trees in its forests, and there is no consensus on their impact on the environment or how to deal with them and it has become a major concern. “The scope and magnitude of the problem is seemingly overwhelming,” said Janet Upton, a deputy director for the California Department of Forestry and Fire Protection (CAL FIRE).
In November, the U.S. Forest Service said an aerial survey revealed that 36 million additional trees had died in the midst of a multi-year drought, bringing the total since 2010 to more than 102 million.
The tree deaths have been concentrated in the southern and central Sierra Nevada, but experts warn of increasing deaths in forests all the way up to the Oregon border.
The phenomenon raises questions on what causes wildfires as well as the role that wildfires play in the greater ecological scheme. Officials are also grappling with logistical, financial and public safety risks associated with the removal of the trees.
According to AccuWeather Senior Meteorologist Brett Anderson, five years of drought in California has been the primary cause of the tree deaths. While a series of potent storms in early 2017 has alleviated the dry conditions, it has not been enough to undo the damage to the trees or to prevent the die-off from continuing.
“When you have severe droughts, trees are going to die,” said Adrian Das, an ecologist with the U.S. Geological Survey.
Ironically the California drought could be over!  After a month of huge blizzards and “atmospheric river” storms, the Sierra Nevada snowpack, a source of one third of California’s drinking water is now at 177% of the historic average, the biggest in more than two decades.
We have to go all the way back to February 1st 1995 to equal the amount of snowpack now accumulated in the mountains.
It’s a breath-taking turn around after five years of punishing drought.
On Feb. 1, 2014, for example, the state-wide Sierra snowpack was just 9 percent of the historic average, the lowest ever measured at that time of year and even worse than the dismal 1976-77 drought, when it hovered in the mid-20s.
More than 25ft of snow has fallen with a new round of storms set to roll into California bringing a further 3ft of snow by the weekend.


State officials though are reluctant to cancel the state’s emergency drought declaration from January 2014 until the full winter season is over.

We lived 30-50 mile from there, depending on location of the tress. We would go 4-5 times a week, and what the trees looked like was strange. It didn't look like drought killed them as it was a tree just every once in a while, not next to each other but spaced like someone had maybe sprayed and killed them off selectively to prove the global warming/drought idea. do not believe what you hear and only half of waht you see.

Thanks Green Sleeves, some are dying from a beetle disease