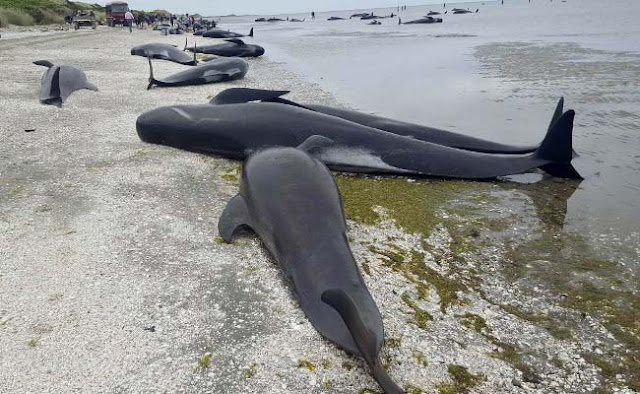 Photo NDTV.com
Sent in by Dr. Carol Rosin
An absolute disaster has struck New Zealand as around 400 whales have been found thrashing tales in distress and stranded on a beach as New Zealanders rush to help

As dawn approached the extent of the carnage became clear as more than 400 whales had swum aground along a remote New Zealand beach. About 275 of the pilot whales were already dead.
Within hours, hundreds of farmers, tourists and teenagers were racing to keep the surviving 140 or so whales alive in one of the worst whale stranding’s in the nation's history. 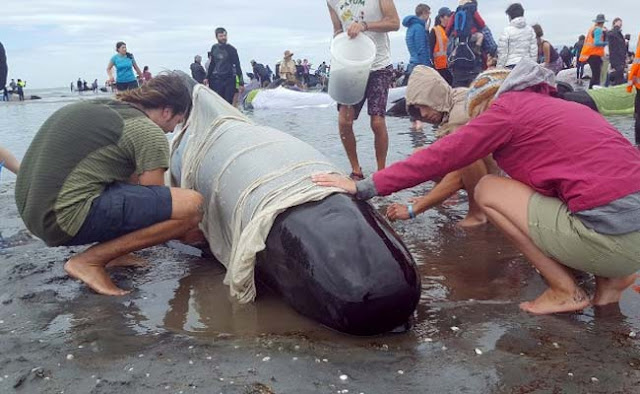 Photo NDTV.com
A witness described the horror, "You could hear the sounds of splashing, of blowholes being cleared, of sighing," she said. "The young ones were the worst. Crying is the only way to describe it."  The adult and baby whale carcasses were strewn three or four deep in places for hundreds of yards, often rolled over on the sand with their tail fins still aloft.
Volunteer rescue group Project Jonah said a total of 416 whales had stranded. When high tide came, volunteers managed to refloat about 50 the surviving whales while the other 80 or 90 remained beached. The volunteers then formed a human chain in the water to try to stop the creatures from swimming back and stranding themselves again.
Farewell Spit, a sliver of sand that arches like a hook into the Tasman Sea, seems to confuse whales and has been the site of previous mass stranding’s.


New Zealand has one of the highest rates of whale stranding’s in the world, and Friday's event is the nations third-biggest recorded stranding. The largest was in 1918, when about 1,000 pilot whales came ashore on the Chatham Islands. In 1985 about 450 whales stranded in Auckland.