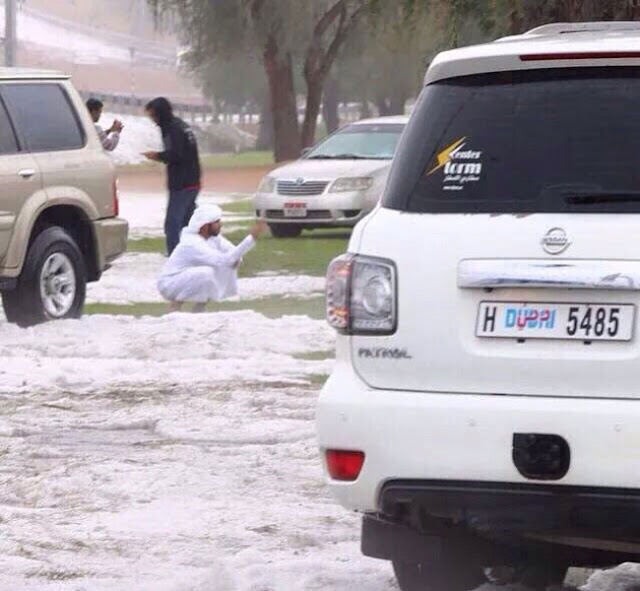 Photo India Today
Just last summer temperatures there reached 54.0 °C (129.2 °F), tying Death Valley's highest reliably recorded temperature on Earth.
The United Arab Emirates (UAE) is known for its desert climate and year-round sunshine, but freak weather conditions have covered part of it in snow. And as if that wasn’t weird enough, heavy winds also caused a crane to collapse, sparking a fire.
One person was injured in the blaze following the crane collapse on Dubai’s busy Sheikh Zayed Road, according to officials cited by AFP.
The freak weather was caused by the jet stream bringing arctic weather into the desert, SEE BELOW.

Click on image to enlarge
The incident prompted the Dubai Roads and Transport Authority to briefly suspend part of the city’s metro service as a “safety precaution” due to falling debris on the tracks.

Authorities also urged motorists to drive carefully on the road, after the National Center for Meteorology and Seismology (NCMS) warned of increasing winds and poor visibility.

These are the types of extreme weather events you would expect to see prior to a major cyclical geoclimatic change (e.g. a major or mini ice age).

These are the types of extreme weather events you would expect to see prior to Anthrogenic Global Warming and an increase in man-made CO2 becoming a high enough percentage in earth's atmosphere to reach the tipping point and turning Earth into the same as Venus, permanently and irreversibly, unless a Global Warming Tax is enacted and all nations come together under the worldly UN Government NOW.

It was caused by the jet stream