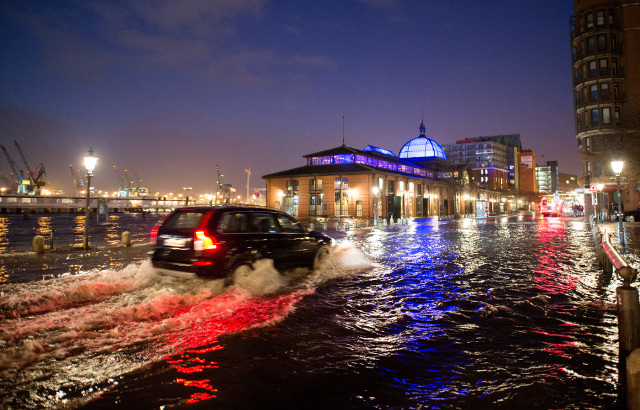 The worst flooding to hit Germany's north-eastern coast since 2006 has caused serious damage, with weather forecasters predicting storms in other parts of the country on Thursday.
Water levels along the Baltic Sea coast rose late Wednesday to between 1.5 and 1.7 metres above their normal levels before dropping to around one meter above average, according to the Maritime and Hydrography Agency.
In the cities of Luebeck and Flensburg cars were carried away by the flooding and parts of Luebeck's World Heritage-listed old town became impassable for pedestrians.
"W e can't comment yet on the extent of the damage,'' a police spokesperson said.
However, Luebeck's famous brick gothic Holsten Gate had been spared by the floods.
On the island of Usedom parts of the beach-side promenade as well as staircases and food stalls were ripped away by the flooding.
"It's no children's birthday party," said Achim Froitzheim, spokesperson for the region of Vorpommern-Greifswald.
It's worse than expected."
Germany has been hit by severe winds and icy conditions in recent days, leading to dozens of road accidents.
Wind speeds of up to 123 km per hour and temperatures as low as minus 20 degrees Celsius have been recorded by the German Weather Service in what has been dubbed Storm Axel.
The storm is now moving across the Baltic towards Belarus.
Stormy weather was also predicted for eastern and southern Germany, with snow and sleet expected on Thursday.