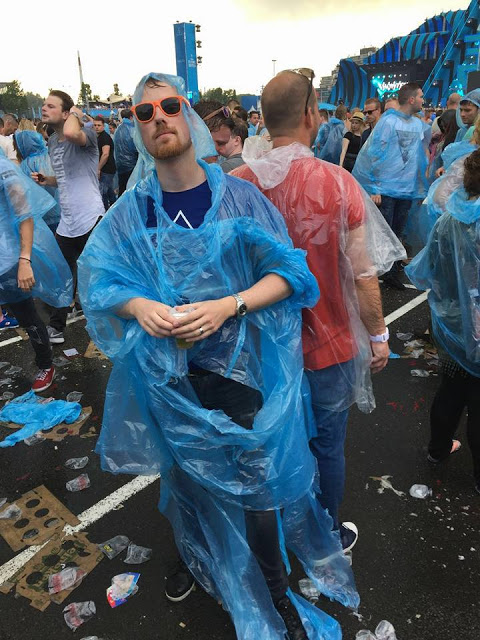 A reveler (Mike) braves the weather in Holland over the weekend

At least 51 people were injured by lightning strikes at the "Rock am Ring" music festival in western Germany on Friday evening, according to German police, with forecasts of thunderstorms and possibly hail to come.
Organizers could not be reached for comment about any plans to shut down the festival, which is now in its 31st year and takes place at the airport in Mendig, a small town located about 150 km from Frankfurt, near the Nuerburgring motor racing track.
This is the second case in less than a week in Germany as 30 children, ages 9 to 11, who were taken to hospital as a precaution, and three adults, who were seriously injured, including the 45-year-old referee at a football match last Saturday
The festival organiser had reported on its website early Saturday morning that at least 42 people were injured, eight seriously.
But the numbers rose as more fans reported injuries in the early morning hours, according to the police spokesman.
Thirty-three people were injured at the festival by lightning strikes last year, according to German media.
Deutsche Welle said this year's festival was attended by around 45,000 people.
Last Saturday a Paris fire service spokesman told The Associated Press that 11 people, including eight children, were hit by lightning.
The victims sought shelter under a tree at Parc Monceau, a public park in Paris' ritzy eighth arrondissement.
Six were seriously injured, including four children and two adults.
Other reports from Poland and Belarus this week.