Earthquakes in strange places: The Mediterranean islands of Cyprus and Malta along with northern Libya hit with mid mag quakes 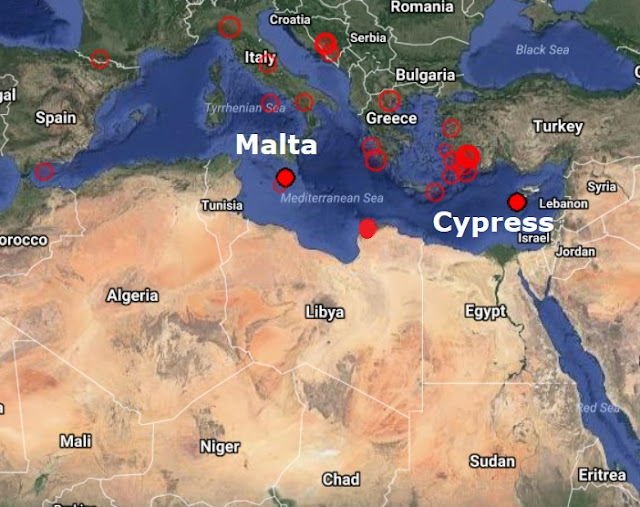 More quakes in strange places after the magnitude 4.1 on the Delaware coastline hit the US yesterday.
The Mediterranean islands of Cyprus and Malta were hit with a mag 4.4 and a mag 3.2 respectively and a more powerful earthquake shook northern Libya.
A tremor was felt in several parts of Malta late on Friday night.
Reports indicated the tremor took place at 11.11pm some 30km south of Malta.
The Seismic Monitoring and Research Group of the University of Malta said it had recorded a magnitude of 3.2.
An hour earlier a small earthquake was felt 41 km northeast of Siracusa in Sicily.
Earlier a more powerful earthquake shook northern Libya and a tremor was felt on the island of Cyprus as a magnitude 4.4 struck off the southern coast.
EMSC, an independent earthquake monitoring organisation said it was a small earthquake which caused no danger.
It does not appear to have been felt in the North of Malta or Gozo but it appears to have been quite strong in Birzebbua.
One report said Luqa residents were forced to leave their homes as they felt their buildings shake with the tremor.
"I felt the furniture shaking," a resident of Malta reported.
A man reported on social media that his house in Vittoriosa shook for some six seconds.
No damage was reported.