The Pound "tanking" FTSE 100 plummets by more than 7% in biggest fall in HISTORY as the UK vote OUT! 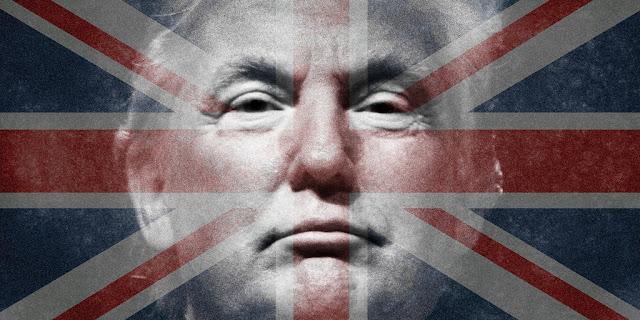 Future? photo www.dailydot.com
More than £100billion was wiped off the FTSE 100 this morning - the biggest fall in UK history - as Britain's decision to leave the EU caused panic across the globe.
London's premier index plunged 458 points to 5,880 - down 7.19 per cent - as experts warned of more carnage to come the Daily Mail reports.
The collapse is far greater than Britain suffered after the Winter of Discontent in 1978, Black Wednesday in 1992 and when Lehman Brothers shut in 2009.
The UK's banks have been the hardest hit with RBS shares down 34 per cent, Lloyds down 28 per cent and Barclays down 30 per cent.
Shares in Britain's largest building and insurance companies were also devastated.
Brexit has also caused panic on the financial markets today as the pound dropped more than 10 per cent against the dollar and Britain was about to lose its AAA rating.
Bank of England governor Mark Carney said 'some market and economic volatility can be expected' in the wake of the Brexit vote, adding that the Bank was well prepared.
Share trading in Japan was even halted by panicked traders as the markets went into freefall when the referendum result became clear.
FTSE 100 and equities London’s index of blue-chip companies fell as much as 8.7 per cent at the open, while the FTSE index, a barometer of domestic companies slumped 12.2 per cent at the open. Homebuilders, banks and retailers led the selling.
Just like the pound, the UK stock market had charged higher in the run-up to the vote as investors’ baked in a victory for the Remain camp.
The turmoil in equities reverberated across the world, with Japan’s Topix down 7.3 per cent and the Nikkei 225 falling 7.9 per cent.
In Australia, the ASX index was down 3.8 per cent.
The global equity market barometer, the S&P 500, is set for a 3.7 per cent drop, according to futures.
For expert information- Financial Times