Are major earthquakes and volcano eruptions increasing in the 21st century....No! 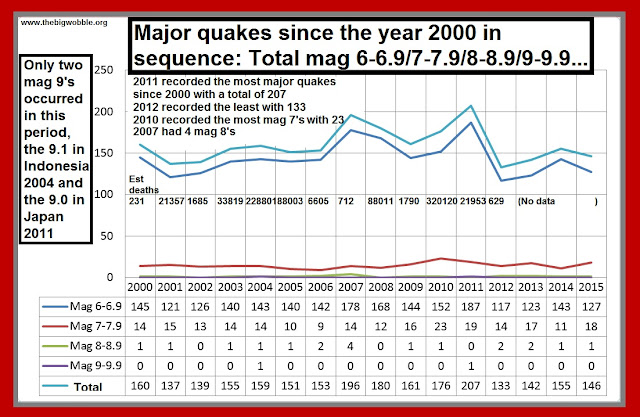 I receive many comments on The Big Wobble claiming major quakes are on the rise, since the year 2000 major quakes have remained quite consistent in numbers.
I have broken down all major quakes since the 2000 and put each category onto the same graph, (see above)
Apart from 2007 which recorded 196 major quakes and 2011 which recorded a record 207 major quakes, 81 of these being in the Japan area, the chart is remarkably similar.
The biggest quake to rock the earth was a mag 9.1 off the west coast of northern Sumatra, Indonesia.
This was the third largest earthquake in the world since 1900 and is the largest since the 1964 Prince William Sound, Alaska earthquake.
In total, 227,898 people were killed or were missing and presumed dead and about 1.7 million people were displaced by the earthquake and subsequent tsunami in 14 countries in South Asia and East Africa.
the only other mag 9.0 earthquake in this time period was the 2011 quake near the east coast of Honshu, Japan.
At least 15,703 people killed, 4,647 missing, 5,314 injured, 130,927 displaced and at least 332,395 buildings, 2,126 roads, 56 bridges and 26 railways destroyed or damaged by the earthquake and tsunami along the entire east coast of Honshu from Chiba to Aomori.
The majority of casualties and damage occurred in Iwate, Miyagi and Fukushima from a Pacific-wide tsunami with a maximum runup height of 37.88 m at Miyako.
The total economic loss in Japan was estimated at 309 billion US dollars.
Electricity, gas and water supplies, telecommunications and railway service disrupted and several reactors severely damaged at a nuclear power plant near Okuma.
Several fires occurred in Chiba and Miyagi.
At least 1,800 houses destroyed when a dam failed in Fukushima.
The Fukushima nuclear plant is still trying to stop nuclear material leaking into the sea and atmosphere five years after the disaster. 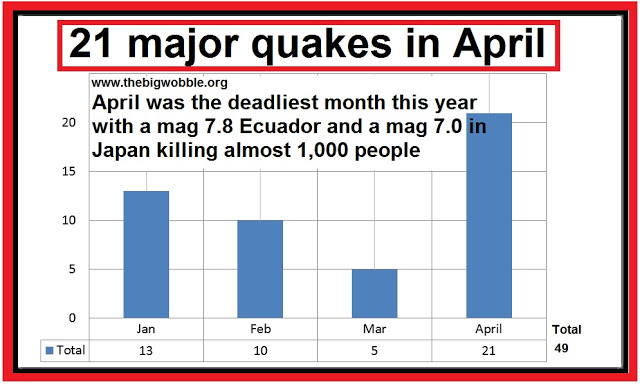 We are only into May of course but 2016 appears to be having another average year with a total of 49 so far, the first two weeks of May has recorded no major quakes.
Major quakes from 1900 to 2015 has seen an increase of 450% although somehow major quakes over mag 6.9, have remained remarkably stable since the same period, see below. 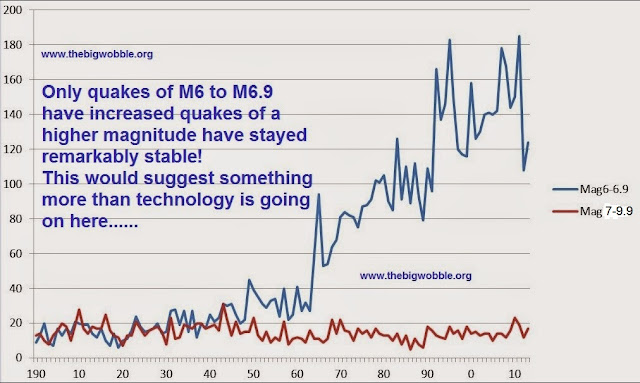 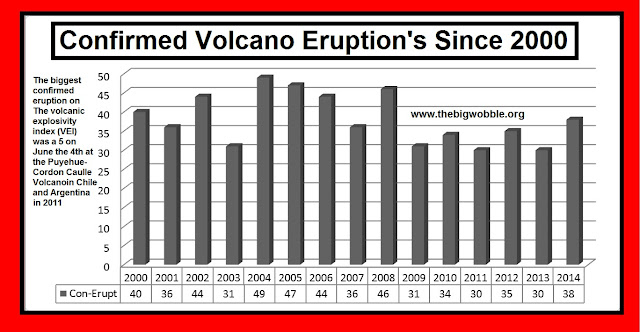 Are confirmed volcano eruptions increasing?
Well not in the last 14 years as the graph clearly shows.
A total of 38 volcano eruptions where confirmed in the year 2014, as you can see on the wonderful graph above which falls into an average figure for the last 60 years or so.
The largest eruption of the on the Volcanic Explosivity Index, ( VEI) in the last 14 years was a 5 on June the 4th 2011 at the Puyehue-Cordon Caulle in Chile and Argentina.
All data from The Smithsonian Institution
The Mount Tambora (1815 eruption) was a 7 on the Volcanic Explosivity Index, ( VEI), responsible for 92,000 deaths, is the largest and deadliest volcanic eruption in recorded history.
It was so large it caused the "Year Without a Summer" in 1816.
In 1833 the Krakatoa eruption killed 36,417, and scored a 6 on the Volcanic Explosivity Index, ( VEI) and was heard 3,000 miles (4,800 km) away.
It caused a 5 year volcanic winter.
The island had three volcanoes. Perboewatan (410 ft) and Danan (1,480 ft) was destroyed during the eruption while Rakata (2,667 ft) was only half destroyed but it still remains above sea level.
In 1928, a new volcano called Anak Krakatoa (1,063 ft) grew above sea level, forming a new island by Rakata's island.
The largest eruption in the 20th century was the Novarupta volcano in 1912 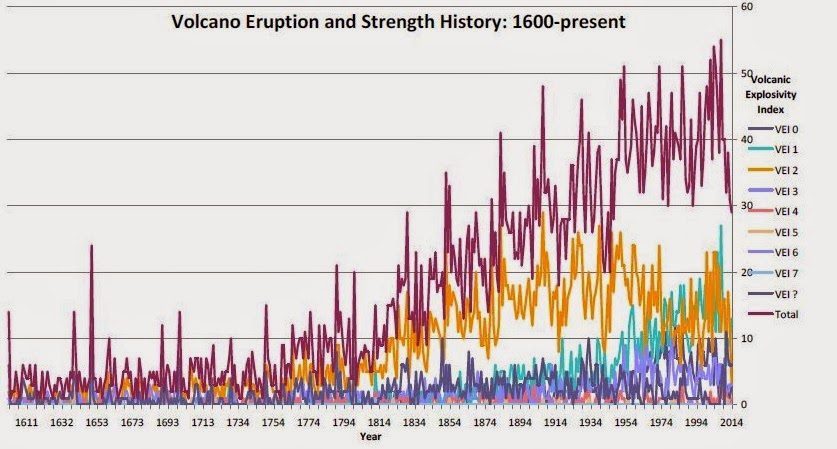 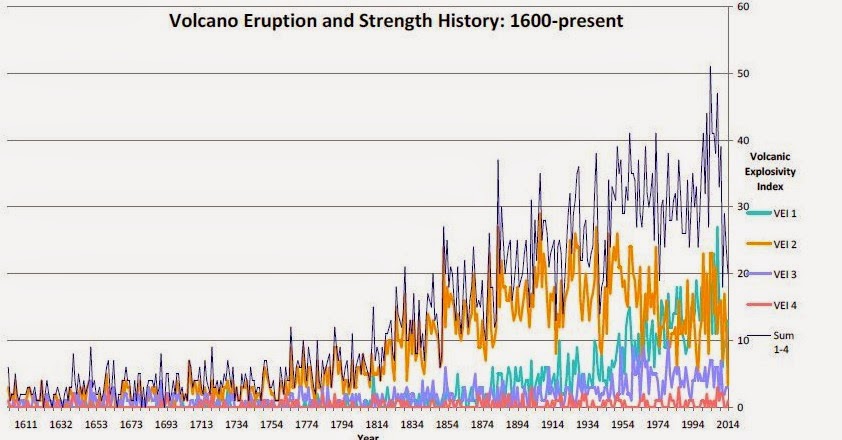 Thanks to Morpheus for the 2 wonderful graphs above
at June 18, 2016