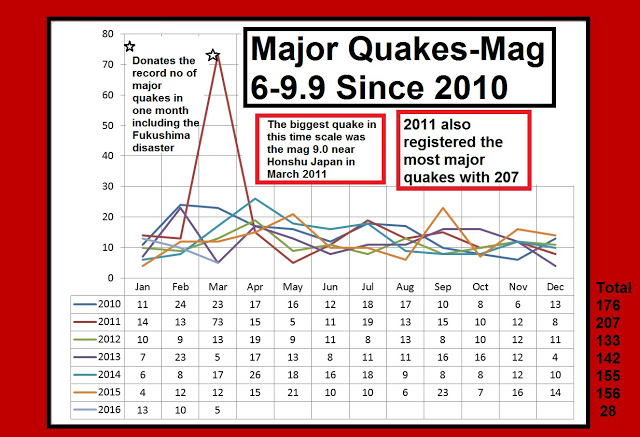 An average start to the first three months of 2016 with 28 major quakes but April promises a big total with 14 so far March 2011 saw an unprecedented 73 major quakes but only 11 of them were in countries other than Japan, the largest being a mag 6.9 in Myanmar (Burma).

Japan on the other hand suffered 62 major quakes or aftershocks ranging from mag 6.0 to the incredible mag 9.0 resulting in the Fukushima disaster.
In 2016 Japan is once again in the news for all the wrong reasons as this week three powerful, shallow quakes have rocked the long suffering nation once more.
An average start for quakes in 2016 with 28 major quakes up to the 1st of April, however, April has been a busy month so far with 14 major quakes in the first half of the month bringing the year total up to 42, still a long way to go of course but a long way from the 2011 total of 207, the highest yearly figure by far since 2010, probably ever.
at June 18, 2016