Shortage is quickly becoming the new buzzword around the world thanks to Corona. There is beginning to be a shortage of everything! As food shortages begin to cause inflation, a lack of wind in Europe has stopped the wind turbines and caused a hike in electricity prices! 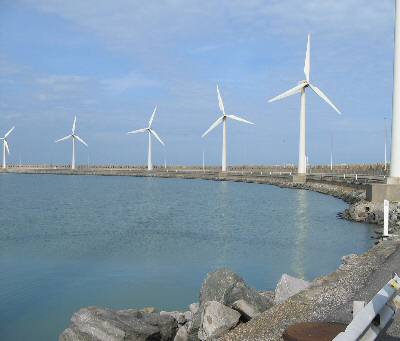 No wind in Europe! Credit Wikipedia.

Shortage is quickly becoming the new buzzword around the world thanks to Corona. Truck drivers in Europe are being offered astronomical hikes in salaries as supermarket shelves become empty. In the UK the government wants to make the driving test for truckers easier so it will be more appealing to younger people! Inflation in Europe and the US is beginning to spike as more and more outlets suffer shortages. In California last month and Spain this month both suffered aviation fuel shortages causing problems for the fire services as they attempted to put massive fires.

As climate chaos escalates many farms are suffering. Many areas worldwide are suffering a shortage of rain, while other areas are being flooded, however, there are now, numerous reports around Europe of a lack of "wind!" Yes, wind. The shortage of wind is affecting wind turbines which in turn is sending the price of electricity sky high.

Yes, as the world suffers shortages which are inevitable during a pandemic there is a dark and sinister " third horse, black as night, carrying a rider who holds aloft a pair of scales he is the one who will bring famine to the world.

Inflation can cripple the most powerful of nations and bring a country's entire economy to a grinding halt in just a few hours causing panic and a run on the banking system. The German Weimar Republic effectively collapsed after the value of the mark went from around 90 marks to the US dollar in 1921 to 7,400 marks to the dollar in 1921.

In Zimbabwe between 2008 and 2009, the monthly inflation rate was estimated to have reached a mind-boggling 79.6 billion percent. I remember back in the '70s, the UK economy rose by a massive 25%, causing general strikes, riots, protests which ground the country to a halt. Unemployment rocketed and GB nose-dived into a recession that lasted more than a decade. The US and much of Europe suffered too and all the signs are it is about to happen again.

A brief look back at the '70s in the UK,  warning, noise, and cussing

xx
Anarchy in the UK... Punk music emerged in the UK during the dark days of the '70s. Recession, inflation, national strikes, riots, protests, unemployment, and a three-day working week due to electric shortages, plus an IRA terrorist bomb campaign in England made the '70s the most gloomy decade in recent memory for the Brits.
It wasn't much better in the US, inflation, riots, and protests were also common and the Army had to flee Saigon in Vietnam. Terrorism hit Europe during the Berlin Olympics. Known as the Munich massacre an attack during the 1972 Summer Olympics in Munich, West Germany, by eight members of the Palestinian terrorist group Black September, who took nine members of the Israeli Olympic team hostage, after killing two more.  The Black September commander was Luttif Afif, who was also the negotiator. West German neo-Nazis gave the group logistical assistance. The '70s was the most depressing time I ever remember until 2020 arrived that is, the '70s are back.
Boogaloo 2021
Front Page Headlines
at September 15, 2021
Share