Hosea a prophecy revealed: Israel and its people will be revived in two days after the death of Jesus: A day for a millennium, 30 AD + 2000 is 2030 with Israel revived during the 2nd day in 1948 if this is correct we are very very close to the tribulation period 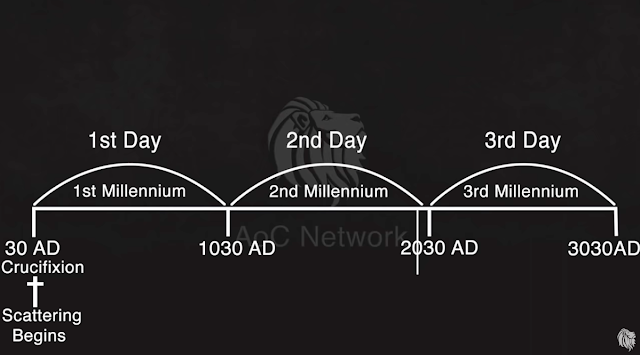 Taken from the wonderful AoC Netwerk video below.

Recently, it has become apparent our world leaders, politicians and even our religious leaders have become “de-franchised” from the people they serve. A Mr Norval Cunningham, a friend of mine once wrote they are showing an "Incompetence Syndrome” and are struck with blindness! This "blindness", or inability to comprehend, can be easily recognised in our leaders who are making astonishingly misguided decisions or comments, on TV or social media. Another way of recognising world leaders are struggling with the "Incompetence Syndrome"; struck with blindness, are the questions that they ask, or fail to ask. Our politicians and religious leaders are being exposed by doing and saying what they shouldn’t be and not doing and saying what they should be.

In Corinthians, 1:19 we read, For it is written: "I will destroy the wisdom of the wise; the intelligence of the intelligent I will frustrate.”

This destruction of the wise and the intelligent, (leaders) will become worse in the near future they will be the ones who will bring final desolation to our planet with their greed and hubris. Our planet is a living breathing organ it revolves with the spirit of God, our planet feels Him. In Isaiah 64:1, we are reminded that the mountains tremble before Him!

Have you noticed many Bible secrets, secrets which have been hidden for thousands of years are suddenly being revealed? This is because we are so close to the return of Jesus. Much closer than you can imagine. Our sick planet feels it and although Jesus told us no man knows when that day will be, He did tell us to look for the season. Today I watched another remarkable video from the wonderful AoC Network, which is below and points to just how close we could be, to the wonderful second coming of Jesus Christ, the King of Kings.

Around 753  BC Hosea was a prophet to the dependents of Abraham, the Israelites. Because the Israelites had done badly in the eyes of God Hosea prophesied they would be punished by the nations of the world but because of God’s grace, He would revive them and their nation.

The first part of Hosea’s prophecy was fulfilled in 722 BC when the Assyrians came and took the Israelites into captivity. However, we can clearly see the prophecy was written to parallel future events. Hosea warned the Jews since they had rejected God His hand of safety would be removed but he also offered them hope. Hosea told them their nation will be revived and they would live in the kingdom of the Lord when the Messiah returned.

But first, let us see when the nation was destroyed. In Zechariah 13:7 we read, “strike the Shepherd and the sheep will be scattered and I will turn my hand against the little ones. The Jewish people were always referred to as God’s sheep. So, when were the Jewish people scattered and who was the shepherd who was killed and when was he killed?

In Mat 26:31 during the last supper, Jesus said, “this very night you will all fall away on account of me for it is written.” “I will strike the shepherd and the sheep of the flock will scatter.”

In Luke 21:24 Jesus explains, “they will fall by the sword (the jews) and will be taken by all nations Jerusalem will be trampled on by the Gentiles until the time age of the Gentiles is fulfilled.” (When the Jews will reclaim their land). Incredibly this happened in 1948 when Israel became a nation again and then in 1967, they recaptured Jerusalem. The words of Christ were fulfilled and a prophecy written hundreds of years before Christ came into the world became true.

Hosea, 6:1-2 After 2 days He will revive us and on the third day he will raise us up that we may live in His presence. We know, in the Bible, days and numbers are often in prophetic codes. Often we read of a day for a year.

Let me explain. Jesus is thought to have died in 30 AD. One day after His death is a thousand years, so 1030 AD but the prophecy says Israel will be revived in two days which would bring us to 2030 with the actual revival taking place during the 2nd day in 1948. They would then be rose up to live with the Lord on the third day, 2030-3030, the 1000 year reign of Jesus Christ. And just to rubber-stamp this prophecy, Abraham was born 1948 years after Adam.

Just a reminder, no man knows when the Messiah will return but he did tell us to keep looking for the season.

Here is the wonderful video

The Bible foretold Major events in recent history. This is a must-see for those interested in Bible Prophecy or those who wonder if the Bible truly recorded the future. ► The film featured at the end is "End of the Harvest" and can be obtained here: https://christianmovies.com/products/... ➤ View More Content and Support the Work: https://www.patreon.com/aocnetwork ➤ Our Bible Study Tools and Resources: https://www.aocnetwork.org ➤ See Previous Episodes Here: https://www.youtube.com/playlist?list... AoC Network is a Christ-Centered content creator with a goal to represent God’s Kingdom online. Learn More at https://www.aocnetwork.org/about-us • Many of our videos feature movies we highly recommend! A Google search using the title and date provided in the ending credits will help with purchasing them.