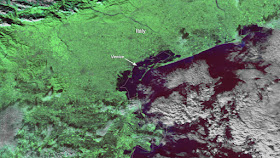 The NOAA-20 satellite captured this image of Venice, Italy, on Nov. 14, 2019, after devastating floods disrupted essential services and seasonal tourism within the city. A local ordinance declared a state of emergency for the city and suspension of municipal services after Venice experienced a tide of 70 inches on the evening of Nov. 12. On Nov. 14, the Tidal Forecast and Reporting Center of Venice tweeted that it was experiencing a 47-inch tide at 10:36 a.m. local time and that they expect a tide of nearly five feet for Friday at 11:20 a.m. due to sirocco winds (hot, humid winds from Northern Africa) coming across the Adriatic Sea. The Tide Bulletin in Venice added that “abundant rainfall in the central-northern areas on Friday will give way to possible cyclonic precipitation on Saturday; the evolution of exact weather patterns remains uncertain.”
Venice, a city that is composed of more than 100 small islands within a lagoon, is especially susceptible to flooding and severe weather. However, the mayor of Venice, Luigi Brugnaro, asserted that this year’s flooding outstrips previous records: “These [floods],” he stated on Twitter, “are the effects of climate change.” Additionally, NOAA records indicate a steady long-term linear trend towards increasing sea levels in Venice. In 1900, when measurements were first recorded, the sea level averaged at 271 inches; in 2020, it is projected to exceed 23 ft.

According to the BBC, Venice has been hit by a new high tide of 160cm (5.3ft), giving residents no respite from a crisis costing millions of euros. World-famous St Mark's Square, a magnet for tourists, has been closed, and schools are shut for the third day. The Italian city's famous waterbuses - the vaporetti - have stopped running. The 187cm peak on Tuesday was the highest level for more than 50 years, damaging cultural monuments, businesses and homes. More than 80% of the canal city was flooded.

Almost 150 flood warnings remain in place across Britain after more heavy rain fell last night. While the Met Office is forecasting the rains to finally ease off today, heavy downpours overnight have increased the number of flood warnings in effect. The Environment Agency (EA) has posted 147 current flood warnings - in which immediate action is required - with 145 in England and two in Wales. There are also 174 flood alerts current, warning people to be prepared for possible flooding. The warnings and alerts cover most of England. They are in force across the south of the country from Cornwall to Kent, from Chester in the north-west to areas just north of Norwich and regions to the east of York, and most parts in between. The EA says it is working with emergency responders and local authorities to protect people and properties in Yorkshire, Derbyshire, Nottinghamshire and Lincolnshire. The Met Office's Friday morning forecast for the UK is for "rain at times, but not as heavy as recent days". It has forecast "further rain at times" for Saturday in England and southern Scotland. Almost 50mm of rain fell near Tal-y-Maes, Wales, in the 24 hours on Thursday evening, and the 49.6mm recorded in Brecknockshire was almost matched by Ross-on-Wye in Herefordshire, which saw 48.8mm over the same period. The rain arrived alongside cold temperatures in some parts, as parts of the south-west of England did not manage to climb above two degrees on Thursday, but floodwater remains the primary concern. Machines were pumping 2.5 tonnes of water per second out of the Yorkshire village of Fishlake, according to the EA, as British Army soldiers helped reinforce flood defences, the Guardian reported. 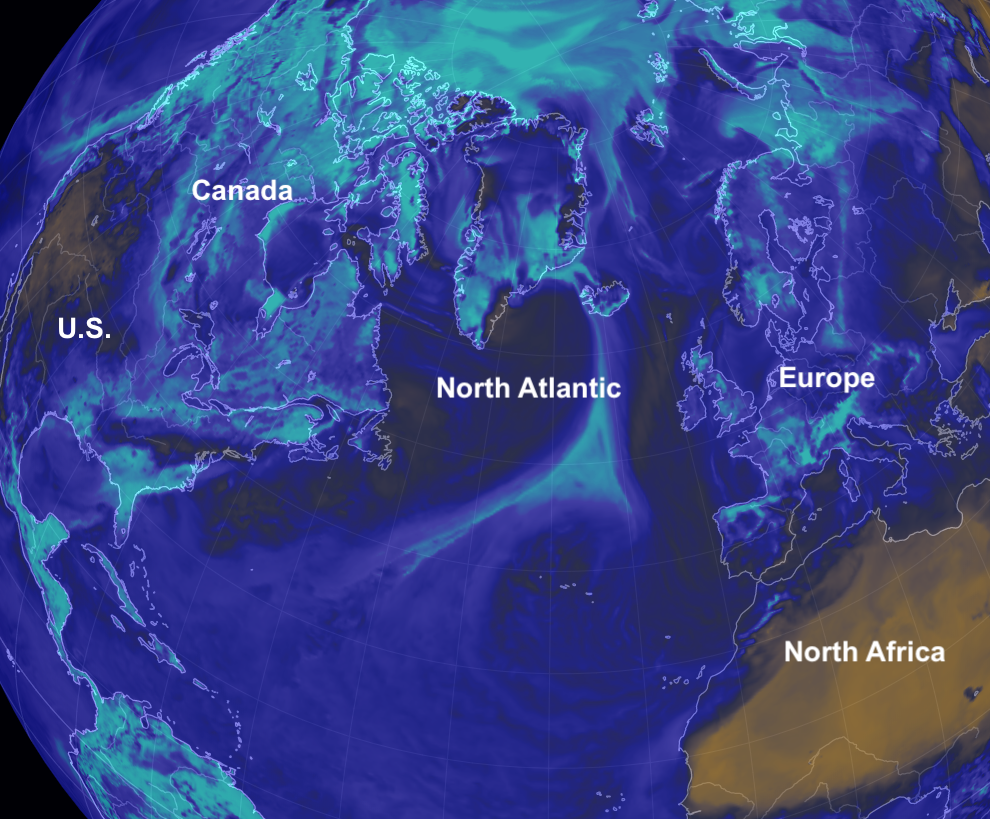 Earthwindmap showing the incredible amount of humidity in the atmosphere around the Northern Hemisphere at the moment.
Snow, ice and heavy rain have caused power outages to tens of thousands of homes. Authorities urged people to stay off the roads after a motorist was killed by a falling tree. Heavy snowstorms wreaked havoc across the southeast of France overnight Thursday. A 63-year-old driver was killed as he tried to remove a fallen tree from the icy roads and another tree fell on him in the commune of Roche. Another man who had helped him was injured. About 140,000 people were left without electricity in the departments of Drome, Isere, Rhone and Ardeche, power company Enedis said. Train traffic was expected to be interrupted in and around Grenoble at least until Friday afternoon because of fallen trees on the tracks. Cars and trucks were left stuck in the snow and many roads were closed across the region. Authorities urged people to avoid the roads. Up to 20 centimetres of snow at low altitude and up to 30 centimetres (1 foot) are expected to fall above 300 meters, according to France's Meteo weather service. The snowfall is expected to stop by Friday night. 1 metre of snow fell in the Pyrenees yesterday.