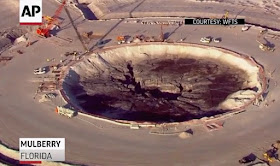 Photo AP
A sinkhole in Florida has swallowed 215 million gallons of radioactive water, leaving residents fearing to shower.
The sinkhole is now in the process of getting filled in.
A massive sinkhole at a Florida fertilizer plant that swallowed more than 200 million gallons of radioactive water is now in the process of being filled.
The toxic sinkhole that opened up at the Mosaic's New Wales plant in Mulberry, Florida, is being sealed by a concrete mixture. 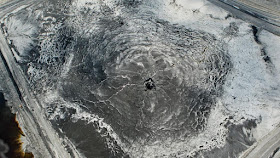 Photo The Weather Channel
Video taken from WFTS-TV's helicopter last week showed a built-up ring around the hole as crews have begun pumping the mixture inside.
The sinkhole, which measures 45 feet in diameter and is 300 feet deep, opened up beneath a pile of waste material at Mosaic, the world's largest supplier of phosphate.
The Daily Mail reported a storage pond containing 215 million gallons of radioactive water sat atop the waste mineral pile and drained into the aquifer system, which supplies drinking water to millions of residents.
Aquifers are vast, underground systems of porous rocks that hold water and allow it to move through the holes within the rock.
Since then, workers and contractors have been trying to figure out the best way to stabilize and fill the hole.


The Floridian aquifer, one of the highest producing in the world, is the principal source of groundwater for most of the state, and extends into southern Alabama, Georgia and South Carolina.