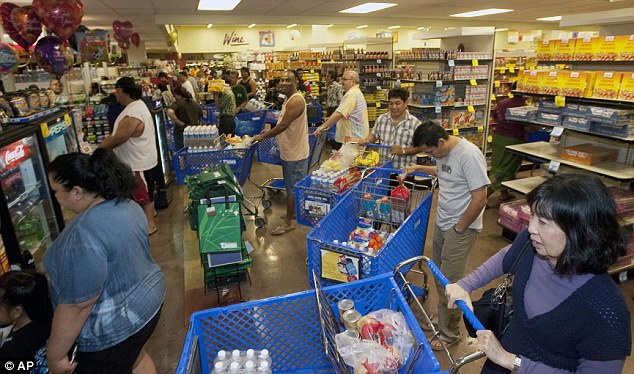 REPORT OF INVESTIGATION Date: 12 July 2016 Details: Between 1205 and 1230 hours ET today, Tuesday, 12 July 2015, this investigator spoke by telephone to: (1) an assistant manager/day shift (a), and (2) the general manager(b) of the store depicted in the image below and identified as follows:
Shop Rite 900 Madison St, Hoboken, NJ 07030 Tel: (201) 792-6070 This investigator inquired whether there has been any panic buying, a noticeable increase in sales traffic or volume, or any discernible rise in consumer purchases of food or personal items within the last 48-72 hours.
This investigator also asked whether there have been lines of customers either waiting to enter the store (standing outside of the primary entrance) or longer-than-average check-out lines of customers waiting to leave.
Both respondents replied in the negative to each of the above questions.
Secondly, this investigator asked whether any media (television, print, radio or internet) had contacted this or any other Shop Rite named or owned store within that same period.
Both responded in the negative.
Lastly, this investigator inquired whether any media persons were observed or granted permission to conduct interviews with customers either inside or outside of their store.
Again, both replied in the negative.
Sent in by Steve
'Forget "Brexit," it's the Italians stupid!'
SuperStation95 reported on Sunday evening of people literally panic buying food in New Jersey because of fears the Italian banking system was about to collapse?
ShopRite in Hoboken, NJ is one of the largest supermarkets in Hudson County, and certainly the largest in this upscale, preppie, city of one square mile.
Situated on the western side of the mighty Hudson River, one can see the entire New York City Skyline from just about everywhere in Hoboken.
But on Sunday evening lines of people queued patiently around the huge supermarket to do an  impromptu shop.
So what was it that was causing lines out the door and wrapping around supermarkets in town?
The huge parking lot was full and all parking spots in the surrounding streets were also taken.
Asked why the massive line around the supermarket?
"Banks in Italy are collapsing" said Margarie Sytola.
"People can't get money to buy food, the ATM's are all out of cash."
Asked why a banking issue in Italy would send her to the supermarket in Hoboken, NJ and she snapped back
"The world is connected.
What happens in Europe eventually happens here.
I'm not going to be one of the people caught with nothing if the banks close."
Jeff Charles, a nearby shopper who overheard our conversation, chimed-in.
"The banks never stopped gambling with our money after they were bailed out in 2008" he said.
"The oldest bank in Italy, been in business since the year 1472, is going under.
If a bank that old is going under, the rest don't stand a chance" he said.
George Kiaffas, from Athens Greece was also waiting in line.
He had experienced the bank "holidays' in Athens last year before he got out and moved with his family in the US.
"The bankers are all in it together, around the whole world" he said.
"They rape the public and when they lose all our money gambling, they get the politicians to bail them out - but the politicians are broke now, so there won't be anybody to bail anybody out" he continued.
"I took what little money I have out of the bank and I keep it in a safe place now; they won't cause me to go hungry ever again" he added. Full story here

Southern California Gas report another methane leak at Porter Ranch
Posted by Gary Walton at 8:34 am